Jesika Von Rabbit
Maria Del Pilar
Okapi Sun
Date Nite
How can you not fall in love with a girl who rhymes John Ritter with "apple fritter", and "soy sauce" with Kate Moss over a bed of dreamy, airy electronica? And there's plenty more lyrical whimsy where that came from. Precision beats, synthy sounds, and dreamy layers make an excellent playground for Jesika Von Rabbit as an indie disco chanteuse. Songs like "Gaydar" give you not only a sweet rhythm, but also some humor and a look into the artistic temperament of a Wisconsinite who escaped the mid-west and ended up stuck in the desert. Jesika Von Rabbit has taken a few steps to distance herself from the much-beloved Joshua Tree trio Gram Rabbit, but her creativity and uniqueness -- which was a vital part of the band's popularity -- is as strong as ever. The Von Rabbit live show is a spectacle, not yet on a Miley Cyrus scale but with just as much energy and weirdo vibes. Jesika is stationed behind her trusty keys, wearing whatever fancy thing she wants, with arthouse backup dancers on each side. The woman can belt out a tune. After a dozen years as the leader in a band, her new found freedom is a treat for all of us, in the form of smart, catchy songs that will heat up the dancefloor.

Part pop diva, part mystic dreamer, and all Los Angeles style, María Del Pilar paints a complex sonic for wonderland dancers and thinkers alike in both English and Spanish. After years in now-legendary LA punk rock foursome, Los Abandoned, Pilar decided to carve out her own path, capitalizing on ravenous fans, her multi-instrumental skills, and her classical training to create well-crafted tunes and energetic (and sparkly) performances. The lady vibrates on a whole 'nother level -- and you won't be able to stop yourself from slipping into a steady groove (or an all-out dance battle, if you're lucky). Pilar's compositions stem from years of weaving together pop sweetness with indie sensibilities and a slightly punk attitude. "Ilegal en Estyle" was touted as one of the top ten songs about immigration by the Village Voice, "Things Are Falling Apart" is a confessional and compelling tune, and "Quien Eres" treads some philosophical ground hidden under a can't-stop, wont-stop beat. Blondie comes to mind, but with a Chilena twist. You can hear the love of all genres throughout María Del Pilar's body of work: 80s jams, punk, indie, and more when Pilar takes the stage. Pilar sings, plays her uke, and gets people en el dance floor while drummer Matt Mayhall holds down the rhythm and Chilean strummer Giacomo Picasso takes electric guitar duties. Lots of people will tell you that María Del Pilar, with her use of Spanglish and meaningful, poetic lyrical abilities, showcases something vital and important about Los Angeles (and the US in general) -- but even with the weight of all that, something more primal emerges: a beat and a voice that you can't ignore.

If you need a little something to fuel your dance night, put on Okapi Sun and you're good to go. Tight beats, autotuned vocals, and hooks for days form a real live mythical EDM creature, much like the Okapi -- a weirdo mixed up giraffe-zebra that the twosome named themselves after. These two ladies met in Berlin, one of the EDM hotspots of the world, and re-grouped stateside to form an electronic duo. The girls look like models, but aren't just riding on that lucky fact -- both come from classical music backgrounds and they compose smart dance music that can even venture into melancholy from time to time. Disco, arthouse, and beachy 70s rock create the perfect storm of fun both live and in your headphones. The girls dance like pros while multi-tasking: Leo, originally from Germany, plays guitar and keys while Dallas (wo)mans the synth to pour out catchy beats. 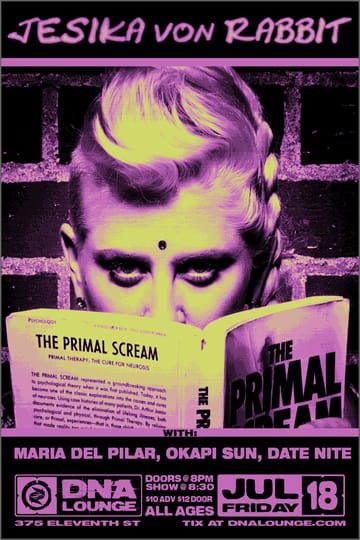