Urizen (TX)
The Brotherhood of Ellipsis (SAC)
Dr. Awkward (SD)
RobotSayGo! (OAK)
DJ Mr. Smith (SJ)
Urizen is a spectacle! Urizen is an experience! Urizen is a whole hell-of-a-lot of fun packed onto a stage full of monsters, metal, robots, mad science, and four dudes rocking their hearts out in the name of entertainment! The balls of Rammstein strapped to the bodies of Devo with the brains of Type O Negative performing the live show of GWAR... with a robot.

Urizen is an electronic-influenced 8-bit-style heavy rock band based in Dallas, Texas. The band is well known for their entertaining and highly involved stage shows. Fixtures of their stage shows include the appearance of a giant, 8-foot-tall Urizen Robot; a 12-foot inflatable cycloptic goo monster; a mad scientist nemesis; electrifying mind-control helmets; and much more!

The Brotherhood of Ellipsis was founded in Woodland, CA by Jacob Martinez and Andrew Wright as a simple cover band in 2009. Their desire to introduce a creative style all their own helped them escalate from the garage to the stage.

Dr. Awkward is a Next Gen Hip Hop artist hailing from San Diego California. He has a signature "Awkward" Flow and brings the nerd pain. He is currently working on releasing his new Album. Doc Awk loves to make music, and he loves those who love to listen to his music. Awk is a self proclaimed Nerd who is focused on bringing Next Gen to the masses. 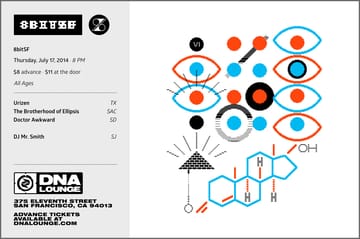