Strfkr (DJ set)
Solidisco (DJ set)
Slaptop (DJ set)
Strfkr is known for being a fun loving indie band with a major electronic influence. Or, if you're lucky enough to see a Strfkr DJ set, a groovin' EDM makers with an indie side. Either way, Strfkr (or Starfucker, if you hate reading between the lines) is ready to make fans dance. The DJ set has our boys in Strfkr mixing everything, from upbeat hits of the 80s to obscure indie electro -- but one thing pervades: a danceable freakin' beat. Strfkr is known for dreamy, half mumbled vocals over an indie electro haze. Guitars, synths, drums all swirl together to make an irresistible noise. Psychedelic synths whip the crowd up to a fever pitch, dancing with all their hearts. The band started in the gloomy grays of Portland, OR, in 2007 but has managed to produce sweet, poppy hooks by the barrelful, especially after a move to sunny Los Angeles. Every two years or so, fans are treated to a new album filled with amazing tunes that are perfect for dancing alone in your room -- or in the middle of a sweat soaked dance floor. These boys know how to curate a good time, often donning costumes or dresses while the audience does the same (seriously, there will probably be at least two guys in the audience dressed up in full costume).

If you can't tell by the name, Solidisco makes disco house music for neo club kids and EDM snobs alike -- mixing the always entertaining house genre with the latest trends in EDM. Dancing is a must. House, or disco for that matter, has been the staple of electronic music for what seems like forever. But when the two DJs of Solidisco got together, they somehow managed to make the house sounds fresh again. It's pretty hard to improve on a classic, but they've done it. Remixes go into territory you might not think about incorporating into electronic music -- like Nina Simone -- as well as some of pop's trendy faves like Bruno Mars, Kanye, or Gotye. Tracks are interesting, easily danceable, and lots of fun -- in a word, solid. The duo's original wizardry is just as fist pumpingly good, if not better than the remixes. Steady beats create a growing excitement, and funky instrumentals and excellent vocalists evoke a simpler, sexier time. Find some gold lamé hot pants, a stiff drink, and get yourself prepared for dance floor bangers in a disco house style.

The music of Slaptop is made for summer in SF -- probably because Slaptop is straight out of the city -- dreamy, adventurous electronic dance music with a positive feeling and unique sounds (the label chillhouse has been thrown around to describe Slaptop, and I think it kinda works). Though Slaptop only has one official track, "Sunrise," it's enough to make anyone salivate for future Slaptop jams. Horns, falsetto, robotic beats, fancy chimes, and more create a feeling of euphoria -- as does Slaptop's promise of "moving to the music til we see the morning light." 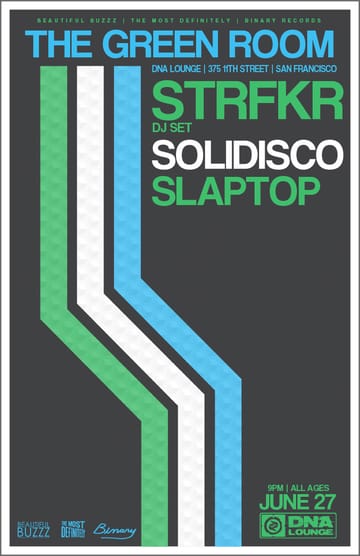 Strfkr: While I'm Alive
Solidisco: Top of the World
Past related events: