Getter
AFK
Barron
Sadhu
Dubstep doesn't get any cooler or more thrilling than Datsik-approved Getter. Getter is a Bay Area boy turned soon-to-be-legend, who, armed with only a laptop, can bring joy to any size crowd yearning to be electrified. Before he could legally smoke Getter (aka Tanner Petulla) was rocking the dubstep world. It didn't take long for him to get the attention of major players in the scene like Datsik and his Firepower Records, or for his tracks to blow up electronic music hustler Beatport's charts. His bass/synth grooves are perfect for any party -- from an underground rager to a hyped up festival. His mixes (and remixes!) are always sick, sometimes even a little gritty, and once you start getting your Getter on, you won't be able to stop dancing. Getter crafts his tracks with ample care: perfectly placed samples, bass drops, and complex rhythms mix with danceable beats, from world influenced moombahton to seriously hard electronica. Each song is like a little piece of some dance floor paradise, no matter where you are listening to it.

Anyone who goes by AFK is probably deeply entrenched in the gaming world. AFK admits this, and goes a little further to admit his love for chicken fingers. With an admission like that, you know this guy is going to make some tasty beats. AFK makes dubstep, bordering on Trap, provides all the wub wub and beat drops that you need to roll on into the night with tunes named after Breaking Bad characters. AFK, aka Jimmy Blythe from Dallas, TX, is another Firepower Records artist so you know every song will contain something to blow your mind at least once -- most likely some epic bass-y element or out of nowhere wobble that will rattle your bones while you try to maintain enough composure to sip your drink and dance at the same time. Songs like AFK's take on "Chain Hang Low" show off what makes AFK unique -- fun electronica with a beautiful build up. He's a one man show, ready to make any floor a dance party and to nerd out and eat chicken during his free time on the road.

Barron is a dubstep artist with a dark side, or at least a little less levity than some fans are used to. His tracks roll on a more luxurious pace, sounding a little dirty. Samples, beautiful bass, big beats, and wonky sounds make Barron's compositions not only interesting, but also damn easy to dance to. Barron's tracks are a little deeper than your average electronic dance music. It's like there's some hidden meaning just below the surface, somewhere between the big bass and the breakdowns. Barron is a thoughtful producer, making every track worth a listen if only just to get dancing.

Germany is the birthplace of the many genres of electronic music, and it has also given the world Sadhu. Sadhu composes big trappy songs with unlimited potential for getting crunk and dancing, whether it's in the club or in your personal stereo. Sadhu cooks the beats, bringing a unique (maybe German) perspective to every set. You're guaranteed to hear multiple songs that aren't in everyone's playlist, all tied together in a way only Sadhu can make happen. Great samples start off every track, with perfect execution throughout the whole song. Sadhu brings a vicious beat to your ears with every tune, especially remixes. Expect a non-stop dance party throughout his whole set. 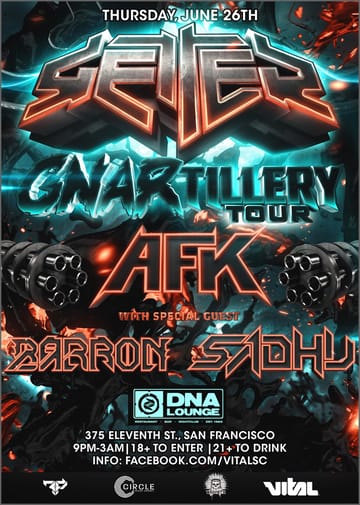