The Dead Rabbitts
The Relapse Symphony
Myka, Relocate
Nightmares
The Dead Rabbitts: Phoenix, AZ is the metalcore mecca, as far as anyone can tell -- so it makes perfect sense that super group of metalcore elite would rise from that particular desert. The Dead Rabbitts are: Craig Mabbit and TJ Bell (both from Escape the Fate), Alex Torres (Eyes Set To Kill, Alesana), and Chris Julian (Greely Estates). These are all seasoned pros of the heavy sound, and don't expect anything less than pure metalcore from The Dead Rabbitts. Blasting drums, aggressive yet emotional singing, beautiful breakdowns, a little synth here and there, and the screaming -- let's not make light of the fact that Mabbit is well-known for his pissed-off screams as the former singer of Blessthefall and in Escape The Fate. But Mabbit's clean vocals show off just how far he's come as a songwriter; he can deal with regret, love, living, devotion all in meaningful lyrics that resonate with the audience. All in all, The Dead Rabbitts make music that metalcore fans want: angry, violent, loud, and expressive. The passion comes through in the Dead Rabbitts live show, after all these guys must love what they do to join yet another metalcore band. All experts and working the crowd, with singer Mabbit screaming his heart out and leaning into the audience while violent sounds come out of the rhythm section to make this truly heavy.

What do you get when glammed up goths meet metalcore heaviness? The Relapse Symphony, and rock band from the home of hardcore, Washington D.C. You can call them the free spirits of the scene, with little adherence to the genre norms. Soaring guitars that sound straight out of the 80's arena rock combines with pop punky vocals and a joyous feeling can speak to anyone -- even the hardest metalcore fan is going to love the fun that The Relapse Symphony brings, despite the fact that there are no growls to be heard. "I fight to win, no giving in, and I'm done wasting time," sings the Relapse Symphony, and as an audience member you feel it -- pretty happy go lucky for a band so darkly dressed. Sweet yet simple lyrics, gorgeous harmonies, and unique rock and roll style make this five piece immediately listenable, and a few guitar noodling solos don't hurt! Live, this band of rebels evokes Motley Crue more than heavy metal, but it's an amazing experience to rock out with skinny little dudes who know how to make an audience scream.

Metalcore bands with two singers are a favorite because they can bring you up so high with soaring clean vocals, and then knock the wind right out of you with a brutal bout of growling, pissed of screams. Myka, Relocate does more than just invite you on their metalcore coaster, they incinerate your eardrums with power. The clean vocalist has an almost boy band perfect voice that betrays his emotions and is a perfect foil for the aggressive growls -- the singers trade off leading the song. Technical prowess mix with pure passion to give Myka, Relocate the ability to make some catchy yet interesting tunes. Choruses feel anthemic, like pop punk of old. The stage performance is an energetic blast -- jumping in sync, double singer swagger, and a metal heaviness brought to you by two guitarists and an excellent drummer. You won't be able to help joining Myka, Relocate during their jumping; they'll give you something to dream about.

Just when you think Georgia is all peach tea, classic rap and fine ladies, you find some truly hardcore deathrockers to throw off your perception. Here come Nightmares. You can tell that a band is aiming for scary rock and roll when they've dubbed their first release, Suspiria -- a tip of the hat to classic gore. And if they have a single named after a Steven King film, in this case Cujo, yes, gore infused post hardcore it is! Even their press photos make the band look like they've been slightly mauled, but are non-plussed by that fact. Classic heavy riffs combine with screamed vocals and death growling make a pretty frightening -- or awesome -- listening experience. It's heavy music for fans of Rise Records (Nightmares'label!) stable of metal core and post hardcore bands, with a slightly cinematic twist. They're doing something really right because as a new band, they already have ravenous fans frothing at the mouth to get a taste of Nightmares. Powerfully abrasive, darkly vicious, horror inspired, and above all, well produced and played, the new Nightmares album, which will drop in June, promises something for every type of new metal fan. Fans of horror films will enjoy the track titles, each named after kitschy or classic genre movies. The Atlanta boys bring their horror show on the road with a heavy assault of growls, pounding drums, and ear shattering guitar. Don't say they didn't warn you with their horror themed album! 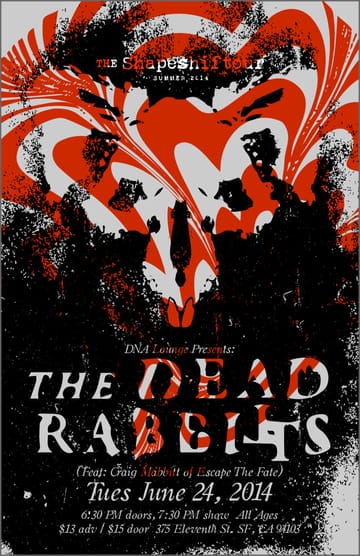 Dead Rabbitts: Edge of Reality
Make Your Move: Relapse Symphony
Myka, Relocate: Something To Dream About