A release party for "Electronic Saviors: Industrial Music To Cure Cancer, Volume 3: Remission".
Want old school dark electronica to help you through your daily trials? Assemblage 23 is here to wipe away your tears, take away your pain, and let you just chill out to some upbeat tracks. Fast-tempo industrial with positive live energy and an airy, bassy voiced singer makes for a great way to kill some time before shuffling of your mortal coil. Although the fun outweighs the dark wave, there is enough of both to please both pop-leaning dance fiends and the hardcore electro-goths. Tom Shear, the brain behind the voice and music, has been working in the industrial dance scene since the late 80s. Shear's voice is dark and dreamy, and could be mistaken for British or perhaps just a thorough homage to the great Depeche Mode which goth and rivet enthusiasts all worship. He's been involved in many a side project, from Nerve Filter to Surveillance, but keeps returning to the baby he birthed in 1988 after finding his voice and his love of industrial dance music. You won't be able to keep from dancing like a rave-kid once always invigorating Shear and his live accompaniment take the stage -- there's plenty of beats to go around, because Assemblage 23 has a long and awesome catalog to pull from.

If robots could sing and make music, they would certainly give you something like Mechanical Vein. Glitchy, aggressive, and surprisingly easy to dance, Mechanical Vein is a new force to be reckoned with in electro-dance music. Producer, singer, (robot??), and all around musical man Keithtron is the mind behind Mechanical Vein. Keithtron honed his skills on remixes before diving deep into the original, hard industrial genre. Now he's a relatively new voice as Mechanical Vein, but Keithtron exercises his electronica muscles as a member of NYC's Nekronet, where he aggressively sings his heart out. Keithron is accompanied by DJ Loren to bring some sweet dark beats without the bullshit. This is the debut of Mechanical Vein, so be prepared for anything.

When you see the zero popping out of Savi0r, you know this is gonna be some synthy tech industrial with a dark side. And you won't be disappointed. Melody and atmosphere hang heavy in the Savi0r landscape thanks to some sparse and creepy piano. Singer Adam croons and yells over dark wave beats that are surprisingly catchy. His voice shows his wide range of influences -- it's a little bit goth, a little bit indie, and a perfect way to narrate the Savi0r experience. Live, Savi0r expands to a three piece to deliver well-crafted melodic industrial for you to sway to. Adam turns into your classic industrial frontman, clutching his mic, feeling the music, and communing with the audience with his dark stare. Metal heads and NIN fans alike will fall victim to Savi0r's dark breed of industrial synth pop.

If happy hardcore was dark and industrial with a young Mick Jagger/Marilyn Manson's swagger, you'd get something like Bay Area band Sorrow Church. Gothic, aggressive, and straightforward, Sorrow Church tells you that "there's no such thing as rock stars," although their singer comes pretty close to disproving that assertion. When swagger and pop sensibility meet cinematic industrial sounds, you've got a winning combination. Dark industrial beats are layered with pounding drums, an energetic vocal delivery, and fuzzy guitars to make Sorrow Church songs very easy to dance to. The band delivers everything live: the melodies, the aggression, the beats, and a whole lot of attitude. Bright lights and dancey beats will cloud your mind and leave you unable to resist the band. 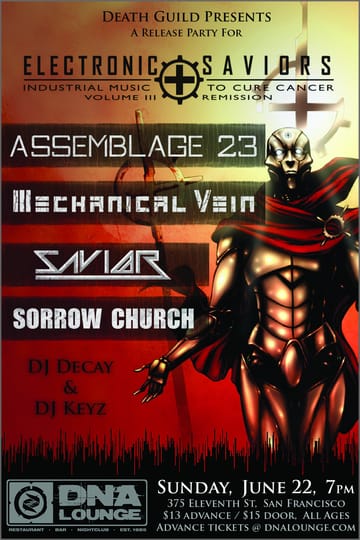