Rob Metal
Metalcore is a stubborn genre, and one that should never change. Luckily for tried and true death metal and metal core fans, we have Unearth to be its champion. For more than 15 years, Unearth has been staying true to the heavy metal genre that birthed them. Metal is their craft, and they do it with an attention to detail rivaled only by the dark brutality of their output. Part homage to legends like Pantera and At The Gates, part amendment to classic subgenres like Swedish death metal and early metalcore, and part uniquely Unearth, the band has never wavered in their grittiness, darkness, or their ability to excite the audience of headbangers (seriously, they've opened for metal legends Testament and easily held their own). Unearth features a death growling lead singer along with some stellar clean vocals and backing vocals from one of their two guitarists. They've got the low end down pat, solos galore, the soul of thrash metal egging them onwards, and enough stage antics for everyone. The band directly engages the audience (you will be sweated upon, front row) and leaps around the stage with wild abandon, antics that are true to the ethos of heavy metal, adding some levity to an already amped up live show. You get the feeling that these guys would be just as stoked to play someone's rowdy basement party as they would be opening up an arena festival -- they are genuine protectors of the faith (aka metal).

Texas In July: Emotional, earnest, raw, and truthful, Texas In July is a metalcore band from, you guessed it, Pennsylvania. Mixing soaring clean vocals reminiscent of emo-alternative rock of the early 2000s with guttural, growling lead vocals that shake your soul, Texas In July creates a moody yet fun blend of all things metalcore. Four boys decided to form Texas In July during their high school days and still have plenty of that youthful energy left to share with their fans. Constant touring has allowed these dudes to form a tight rapport and easy songwriting connection, despite a few line-up changes. Motifs such as transition, Christianity, and faith, mingle with the harder elements such as angry vocals, super powerful, forceful drumming, and in your face guitar. The band has got the technicality of the music down, both on record and throughout their aggressive live show, but also embraces groovin' out and jumping around on stage -- you can tell they're having fun and doing what they want to be doing. The crowd certainly picks up on the Texas In July attitude, and responds with unencumbered dancing. Every breakdown (and there are many) is a chance to jump up and waive your fists with glee.

Cruel Hand: From the tranquil wilderness of Portland, Maine, comes a decidedly un-tranquil band: Cruel Hand. Equal parts thrash, hardcore, and metal, Cruel Hand brings a devastating and brutal sound to every record and live show. The five piece haven't turned their back on fun, despite the deep heaviness of the music. Hair flies, sweat pours, and music pounds as Cruel Hand wails and growls. The band has played huge festival stages and small rooms with equal vigor - their energy, complete with rowdy stomping around stage and singing directly into the crowd, is big enough to capture any crowd. Dual guitars, excellent drumming, and lots of headbanging bring the audience some of the feeling from classic days of hardcore. Don't be surprised if their blend of thrashy hardcore inspires a mosh pit, just get out of the way.

Armed for Apocalypse: What exactly is Armed For The Apocalypse armed with? Heavy, heavy metal. You won't find any clean choruses or slightly happy tunes coming from this five piece from Chico, Ca. Hell, you'll only hear loud, aggressive, dark, and dangerous songs that rumble along at a dirge then switch to fast pace single chords and blast beats. Three guitars make for quite a heavy sound, especially when tuned down and pissed off. There's nothing more evil sounding than the growl emitted by Armed For The Apocalypse's singer -- as if he was calling some demons to his side. With dark lyrics and song titles that speak of demons, world ending, and, a personal favorite, "You Are Alive When They Start To Eat You," make no mistake: Armed For The Apocalypse is intensely, brutal, gory, and ready to explode your eardrums. 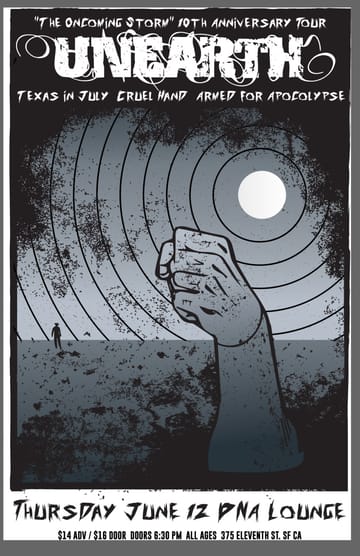