Sworn Enemy
Silence The Messenger
Angerhead
Mudface
Sworn Enemy may be broken, battered, and bruised after nearly 15 years in the record industry, but they are not slowing down at all -- instead, they are bringing their thrash-tinged hardcore straight to your ears with the release of their 7th album. Sworn Enemy sprung forth from the New York hardcore scene at the turn of the century, when hardcore was evolving away from the 80's and 90's sounds and growing stronger and more brutal. Sworn Enemy was on the punk side of the metal spectrum, fast, pissed off, and loud -- and violent enough for their song "As Real As It Gets" to be featured in the "Texas Chainsaw Massacre" remake. The five piece has stayed true to their roots while expanding on the hardcore sound, unafraid to try new musical experiments and eventually becoming more metal as they replaced bassist, drummer, and guitarist. Live, lead singer Sal mans his mic and growls into the crowd while guitarists dole out heavy riffs, headbang in unison, and work the stage. Long hair whips back and forth as the one member who isn't rockin' a bandana and buzz cut channels his inner metal god. Audience, be prepared for a resilient blast of old school hardcore mixed with the best of all metal worlds -- and for quite a bangover the next morning.

Silence The Messenger: This Texas hardcore act is nowhere near silent. In fact, they are very very loud, as is a prerequisite of any metal genre. Loud, aggressive, angry, and full of energy, Silence The Messenger takes all of the brutal things hardcore fans love, and condenses it into a sharp, violent musical outpouring. The band is almost machine like in their commitment to do this metal/hardcore thing right. You are in for a set of ear drum abuse complete with heavy duo guitar riffs, two types of growling and clean vocals, unwavering devotion to bass drum beats, and, if you're lucky, an absolutely devastating cover of Miley Cyrus' "Wrecking Ball" that shows off Silence The Messenger's disparate yet amazing vocal stylings and their ability to make a pop song into so much more. The boys of Silence The Messenger put on a great a show: each member sweats up a storm as he shreds or bodybangs or grooves, and lead singer Steve Tinnon hops onto a wedge between tunes to get the crowd amped up. The badass assault of all things heavy, from growls to breakdowns and back again, will please any deathcore or death metal fan. 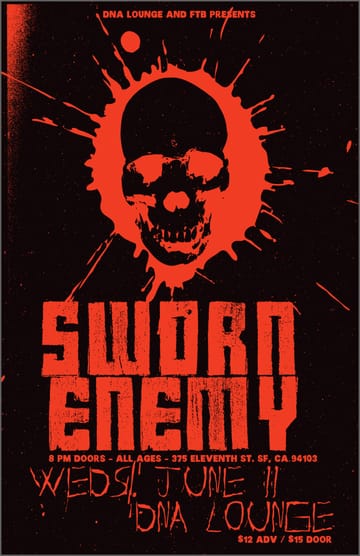