DJ Aspect
As his alter ego Dirt Nasty, actor, musician, producer, comedian, and MTV VJ Simon Rex has developed a die-hard and rabid fan-base across the world since the release of his debut rap-comedy albums 2007 release. Dirt's second album (2010's "Nasty As I Wanna Be") debuted and stayed at the top of Billboard's comedy charts for weeks and featured guests such as Ke$ha, LMFAO and others.

His music and persona have excitedly received a cult following which are not only dominant on Twitter, Facebook, Instagram, YouTube, Vine and iTunes; but at his sold out shows and concerts across the globe. Most recently, Simon (or Dirt Nasty) teamed up with super-producer Diplo, and his friends Andy Milonakis and Riff Raff to form the group "Three Loco." November of 2012 saw the release of an 8-song album on Diplo's own Mad Decent record label which garnished them critical acclaim from the likes of MTV, Pitchfork, Vice Magazine and Perez Hilton just to name a few. 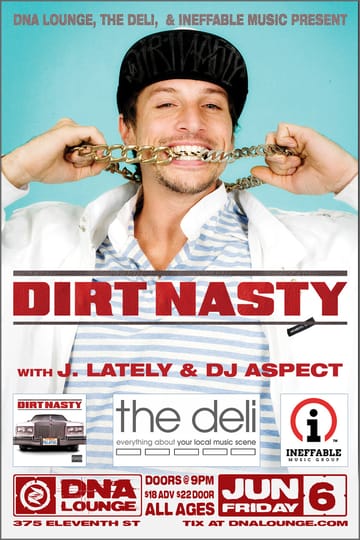