The Night Falls
The Impersonations
Bulletproof Tiger
Air Surgeon
Mock Church
San Francisco's The Night Falls uses a haunting blend of indie and Americana to introduce the audience to war stories of love lost wrapped in the sweet guise of instantly soul stirring alt.country songs. These are songs for late night philosophers to whisper to one another in hushed tones, with no hope of ever finding the exact answer they seek -- because this emotionally-charged band doesn't need to explain the mournful tone, it's something you have to feel from the audience. The four piece create brutally honest tunes in the Americana vein, with plenty of lush harmonies to prop up singer Jay Crawford's whiskey worn vocals. Think Tom Waits' artistically rendered depression meets J. Mascis' vocal timbre. Beth Gladding also sings lead while handling the bass duties, and provides the backing vocals that lends The Night Falls a high and lonesome sound. The point of The Night Falls is to tell stories, and they do it rather quietly but with more than enough grit and guts.

The Impersonations: Sweet and simple, this classic three piece brings straightforward rock and roll and throws in an ample amount of fun. Light on the vocals, but heavy on the riffs and drums, The Impersonations take a spaghetti western sound and mix the surf punk attitude right in. The band evokes a blues-y garage grit, creating tunes that show off each member's talents without being making it too brazen or obvious. They've created sparse but compelling tunes that are immediately listenable and adhere to the tenets of rock and roll: be fun, loud, and slightly fuzzy. Vocals are spoken-sung, and almost seem like off the cuff musings of dudes who really just want to jam out for hours. Expect some shreddy classic guitar solos and powerful drumming, and perhaps some grooving if the crowd wills it.

If you are running low on masked heroes to worship, Bulletproof Tiger has just what you are looking for. Jen-Luc Duvalier and Bobby Miracles formed the synth heavy Bulletproof Tiger in El Paso, but moved on to seaside San Diego, a perfect town to embrace their brand of electro-pop. These masked crusaders are on a mission to bring their mélange of electronic synth-rock to your ears, and they only want one thing in return: your sweat on the dance floor. Aggressive, beat-fueled bangers are the product Bulletproof Tiger is peddling. With triumphant build ups, a dark undertone, and a robot-worthy beat, each song the duo crafts is specially made with the audience in mind -- the tunes are definitely your background music and you are the star of your own video game life. The duo hits the stage in their trademark lion masks, and welcomes the disco madness with just a synth, an electronics rig, and a guitar. Groovy electronic bass lines synch up with synthy soundscapes and perfectly manicured guitar riffs to form a near-psychedelic cloud of electro-pop that will fill any space -- especially the one between your ears.

Mock Church: This duo makes a lot of noise for just two dudes. Armed with only an acoustic guitar, drums, and some brilliant minds, Mock Church stitches together sounds that feel much larger than the two men behind them. Weird in a good way, the band will use chant-like vocals at one moment, then immediately switch to a jumbled sound that only they, or someone speaking in tongues, could make. Mock Church is creative musical project that has many dance-worthy moments while also being perfect storytellers that keep the audience entranced. Yells, wide-ranging percussion, two creative performers, repetitive riffs, and the complete understanding of the wandering troubadour fuel the duo to make songs for all the intelligent weirdos out there. 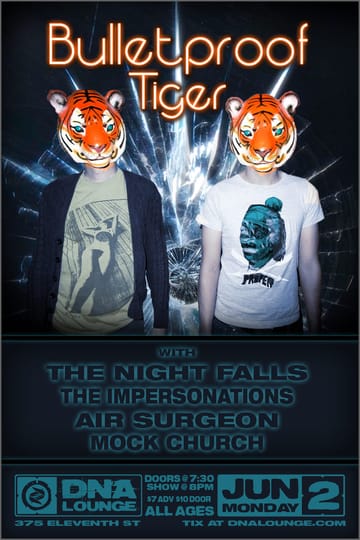