Awoken Shadows
Cherri Bomb
A Hero to Fall
Chapters
Oh! The Horror
Awoken Shadows: These young metal core kids have done it this time: a perfect storm of theatricality, youthful exuberance, and love for the genre. The five piece comes from an idyllic little town in Northern California, and, like many kinds of metal bands before them, have decided to shred as means of seeing other locales. Though they have only been around for a couple of years, the band has managed to entice metal core fans and are ripe for a label pick up. On stage, they bring the drama with heavy riffs, gutteral growls, two guitars, and a symphony of blast beats -- all while maintaining a stoic presence. They weave slow dirge-y sounds into the frenzy of metal core, creating a blend of genres that might even win over some of the heavier metal fans.

With a name like Cherri Bomb, an obvious ode to seminal girl-led rock group the Runaways, you can just imagine the unleashing of femme energy that happens every time these ladies hit the stage to perform their brand of rock and roll. They even hail from the same Southern California proving grounds as Joan Jett and co and were managed by Hole drummer, Samantha Maloney (how's that for grrl power?). The band consists of three LA girls, along with a sole male on guitar, who formed the band at tender young age of 11 by answering an ad from another 11 year old girl. The band went on to open for a host of famous rock acts, and played huge festivals. Not bad for "little girls." And despite line-up changes, being dropped from Hollywood Records, and the turbulence that stems from simply being a teenager, Cherri Bomb has managed to keep on trucking through the treacherous music industry -- they seem to be following their hearts now more than ever. Becoming ever more theatrical, with mime performances, a little goth ballet, and even some time warping (seriously, a great rock cover of the "Rocky Horror" classic). Expect a set of pure, dramatic rock and roll that is never weighed down; it's fun, upbeat, and borders on Disney cute despite the heavy metal influence.

From the land of Ceremony, Santa Rosa, CA, comes a new wave of progressive hardcore acts, led by A Hero To Fall. This four piece respects the long tradition of hardcore, but adds in a few new elements -- a little alternative leanings to temper the storm of metal core. From making use somber piano to sound clips about teen suicide, A Hero To Fall is doing things a little differently. Blast beats are paired with guttural growls and classic emo vocals in fast-tempo tunes with obviously both gloomy motifs and some earnest almost-love songs. These guys are definitely good at what they do: creating technically proficient and perfect soundscapes with slick production, and then going one stop beyond to make songs more interesting than your average metal core offering. The drummer can stop on a dime, creating those beautiful split second pauses that make a listener's ears really perk up, and both singers are two sides of the same, earnest coin. Not to mention A Hero To Fall's sweet backing harmonies, amazing solos and sharp guitar sounds, and old school post hardcore approach. No crowd member will be able to resist the amped up energy A Hero To Fall radiates from the stage.

Post hardcore melody enthusiasts Chapters come from the Bay Area bringing not only dramatic heavy music, but some brutal growls, too. It's almost overwhelming, the sheer amount of growls coming at you in seemingly every direction. That's Chapters' strong point: singer Ben really knows how to make your brain shake and also has a penchant for some deep eye contact (watch out front row). Blasting drums, tight bass lines, lyrics of self-examination, and some hidden references to video games as well as some excellently delivered clean vocals make Chapters an easy to enjoy metal core band. Chapters certainly is overflowing with energy, ready to transfer it to the audience. In synch hardcore pogo-ing is also a welcome treat, just wait for the breakdown to see these boys jump and swing their guitars in unison.

From the vast reaches of our state's capital comes Oh! The Horror, a metal core band with a penchant for drama and electronics. These boys are not only great at this music making stuff, they're pretty excellent as far as humor goes. Songs with titles like "Count Swagula" say it all -- but what else would you expect from a band that was formerly titled Tag, You're Dead. These boys cull their favorite media -- horror films and video games --for inspiration to craft and deliver a super fun hybrid of horror, darkness, heavy metal, and happy-go-lucky theatrics. And they dress the part: smeared make up, black clothes, scary effect contact lenses, and angular haircuts. Oh! The Horror has been on hiatus since January, so this should be an exciting show for anyone who has been waiting to see them live, and because it should be the first show with a few new members. Get ready for synthy, melody heavy gore core, complete with guttural growls, terrified screams, and soaring vocals with a little electronic help. 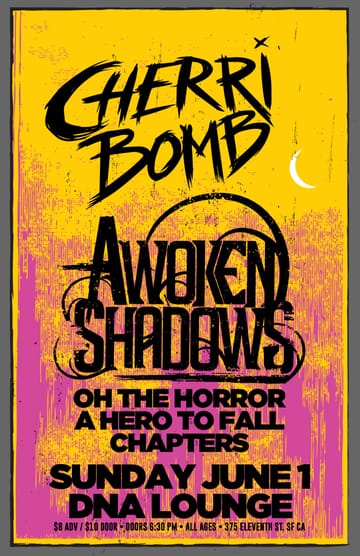