We Are The Men
Sweat Lodge
Unstrung
Asthma
American bands don't usually start out with composing sharp, garage tunes in French. But then again, We Are The Men do not seem to gravitate to those easy rock and roll gimmics -- and they have a Frenchman (or French Canadian, it's hard to tell) in their midst which explains all the French songs and some of the brashness. This Rohnert Park foursome goes absolutely crazy live, and share vocal duties between the whimsically-inclined Franco singer/guitarist and an extremely talented drummer who sings, shouts, and holds down the beat at the same time. The band creates rhythms that can be a sultry groove or a fast-paced frenzy, supplemented by fuzzy effects, amazing guitar solos, and a hell of a lot of attitude (publicly singing "You hipster scum..." takes some serious attitude in the Bay). We Are The Men straddle the edge of a few of the fun-loving genres that San Francisco adores: garage, punk, surf rock, psych and power pop -- and they do it with nods to almost all the decades past. It's a beautiful mix that works extremely well both on record and live. When the band hits the stage, they always seem to be on the edge of a super jam, but kindly pull back to deliver catchy, psychedelic power pop songs in French and English to a completely won-over audience. Expect some head shaking and teeny bopper dancing to these groovy dudes' waves of rock and roll.

Sweat Lodge's lo-fi punk assault is a welcome addition to the Oakland history of chaotic wild men (and women) making music to dance to -- or at least stare uncomfortably down at your tapping toes as others bop and thrash. Adam, Rachel, and Rocky make noisy tunes bordering on intense that are the perfect backdrop to summer day drinking in your backyard, when you think your neighbors might call the cops -- jittery but fun. They have a song called "Throw Rocks," which pretty much sums up the type of DIY ethos you can expect from the three piece. Heavy drums, alternative/90s style guitar noodlings, and a distorted vocal performance are mainstays of the trio's sound. "IDK" sounds pretty close to Pavement territory, but updated for the new era of tape loving garage enthusiasts living in the Tumblr age. If there's a deeper sense of ennui lurking beneath these short and sweet rock noise numbers, it may take repeated listens to locate -- or the pleasure of a live show. Sweat Lodge is the type of noisy band that can affront the more sensitive types, and get all up in the audience, causing both frenzy and a little terror a la thrash metalers of old. Not bad for a band of fuzzy garage rockers.

The Bay Area's Unstrung is a punk rock dream: catchy, fast, and loud with indie-pop leanings that come through all the noise. At times Unstrung even jangles beneath shouted vocals. Unstrung was born out of the loss of another Bay Area indie punk band, Mud Mouth; three former Mud Mouth members decided to simply get on with their music and now we have Unstrung. The trio brings out the teenage boy in us all with their hilariously titled "Sucking Fun in the Fucking Sun" EP. Luckily the tunes are surprisingly well-developed and aggressive for a band known for being young and sloppy, with less fuzz than your average Bay Area punks. You can actually pick out some sung melody, which sets Unstrung apart despite their relative new-ness. Expect a high energy, punk rock show from these dudes complete with debauched tunes, sweat, and perhaps a little dancing.

Asthma, like their hometown city of San Francisco, can be dark and dirty but in a delightfully captivating way. While they've only been around for a short time (with only a handful of songs released to date), they've managed to perfect that balance of dirgey doom with punk rock to create a shadowy blend that is haunting yet still ear gratifying. Passionate yelling swells over a bed of raw and ominous riffs and drums to create a darkly compelling albeit primitive sound. Songs have titles like "Roach Killer" and "Doom City," which should give you a pretty good idea of this band's character. It's a little grungy, a lot lo-fi, and definitely in the spirit of the darker side of punk music. 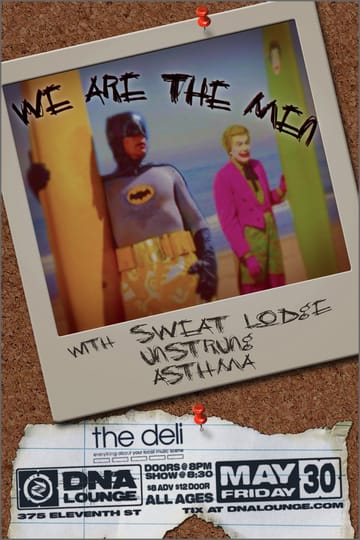