Aaron Axelsen
Parallels: An eighties tinged synth pop band of siblings from Toronto, Canada is bringing an intelligent dance set with an icy edge straight to your ears. Tracks ebb and flow, changing from dreamy downbeat electronica to rapid fire pop perfection and back again. Parallels channels the best of Moroder and Madonna, adding complex textures over singer Holly Dodson's airy vocals. Holly grabs the mic and sings sweetly, grooving around the stage or playing keyboards while her brother Nick hits the keys and the band's third member, Artem, holds down a steady beat on the drums. It's not every day you find a great brother sister act -- and this one is pretty stellar: sounding like a Blondie meets Depeche Mode with the aid of modern tech to make them appropriate for both an EDM freak and a rock and roll lover. There's even a bit of j-pop sounds tucked underneath for good measure. Plenty of synth breakdowns, disco-esque rythms, and robotic soul effects. Parallels lays down a perfect mix of sounds and beats to get even the most jaded hipster moving their hips. There is plenty of space between verses to really fine tune your dance moves, as driving beats build up to a sweaty climax.

Leave it to San Francisco to produce an orchestral synth pop masterpiece in the form of Breakdown Valentine. The energy coming from every track swirls and swoops down from some airy place to get forever stuck in your head -- Breakdown Valentine is hypnotizing. Dreamy vocals, pulsating electronics, and devastatingly good beats are all reasons to close your eyes and just let your body go with the flow during a Breakdown Valentine show. Olivia, the band's female vocalist, has a sultry, low voice -- a perfect complement to the heady, dance-y compositions by her bandmate and guitarist Allen Davis, formerly of Every Move A Picture. The two singers trade vocal duties and add backing vocals to each catchy electo gem. The band formed as a long distance writing partnership and culminated in Davis moving from Portland to SF so Breakdown Valentine could thrive, and impress live audiences with their slightly dark, very synth pop sound. Part tragic, part romance, and part catchy pop, Breakdown Valentine is a splendid electronic act in the vein of Glass Candy or Chvrches. Stunning and soulful, the live set adds a drummer to give the songs a perfect beat and encourage at least a little swaying.

The Trims are here, so you know it's time to dance. The indie dance band hails from our southern neighbor, San Jose, and brings beats, smooth low vocals, and a fast, catchy sound that is sure to ensnare you upon first listen. Think Pulp or Franz Ferdinand, with a take on rock and roll that includes not only upbeat drums and bass, but also some very well placed handclaps and excellent backing vocals to add some youthful yelling energy. As a live band, the Trims makes their presence known with a lead man who croons and dances a la Ian Curtis and musicians who gleefully groove to the beat. The band has already brushed up against the big time, with MTV using the song in an episode of The Real World -- "Out Of Control" provides a great big ball of fun, with those aforementioned handclaps hidden between well-crafted electro synth pop beats. The Trims are nothing if not fun, with lyrics touching on all things sexy and heartbreaking. The five piece definitely has an ear for Brit-pop inspired melodies, but with a contemporary electro rock spin that is infinitely good for dancing and acting like youngsters. 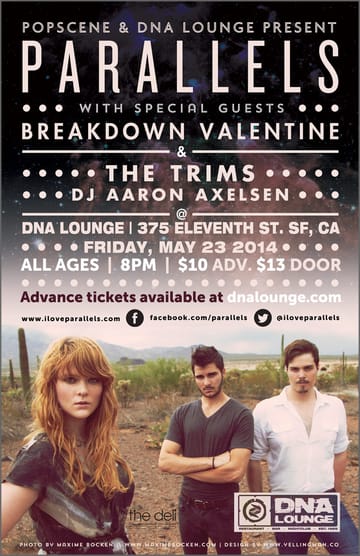