Devil Driver
Whitechapel
Carnifex
Revocation
Rivers of Nihil
Fit For An Autopsy
Metal heads aren't usually known for being genre benders, willing to evolve to keep their music vicious and vital -- but, then again, Devil Driver is not your average metal band. The Santa Barbara band is named after an Italian witchcraft bell that drives away evil spirits and has been playing as DevilDriver since 2002. The five piece starting out as metal loving youngsters playing Slayer covers who happened to meet a legend in the flesh, Coal Chamber's Dez Fafara, as he was just about to leave his band. When the youngsters and the legend united, it was evil magic -- and that magic has been growing, changing, and getting better for more than a decade. Coal Chamber has reunited, so Dez must make his unique voice work overtime. The vicious growls and guttural low singing vocals are a signature part of Devil Driver's violent, ever changing milieu of metal grooves and melodic death metal. Fast, intense riffs, alternating with melodic sludge-y grooves, aggressive as hell drums and bass, and a signature death growl make DevilDriver one of the best heavy metal groups on the West Coast. Live, the band brings their furious metal to the audience, complete with hooks and grooves, headbanging, whipping hair, flying sweat, and a classic metal energy to inspire some pushing, shoving, and devil driving. Don't forget, this is the band that tried to win a Guiness world record for largest circle pit -- so make an effort to be lively.

A name like Whitechapel sounds lovely, but the band's trademark metal sounds are downright dark. Why a band of good ol' boys from Tennessee named their group after a district in London, England is a mystery, but what isn't a mystery is that the six piece is helping to shape heavy metal deathcore -- they even broke into the Billboard 200 with their last two albums. An engaging blend of heavy metal, melodies, dark ambience, and even some piano, the musicians in Whitechapel aren't staying still: they've embraced evolution, and don't mind adding some at-times-unexpected elements into their sound in the name of staying fresh and giving their huge fan base something interesting to chew on. Precision drumming (courtesy of new drummer Ben), brutal vocals, and a darkness usually reserved for older, Norwegian metalheads, Whitechapel is taking depressing and brooding deathcore to an exhilarating and groove filled level. Singer Phil Bozeman traverses the stage, growling into his mic, raising his arms to the sky, and grooving with the rest of his band. The band feels so together -- everyone is in synch, delivering heavy, melodic, darkness right to your ears. Watch for some amazing, in-unison head banging -- from the musicians and the fans all around you.

Carnifex is here to slaughter your notions of death metal -- and your ear drums. Aptly named for an ancient executioner, the San Diego five piece strains the outer limits of carnage and destruction to deliver a heavy, deathcore metal assault that should make the most extreme death and black metal fans content. Carnifex, as they stand before you today, was formed in the fires of endless touring, and honed their vicious live show by that old rule of thumb: practice makes perfect. Singer Scott Lewis unleashes brilliant voice, whether it be low pitched and terrifying or something akin to a Deceptacon growling/singing about letting go. Carnifex knows how to add in elements like the well-timed breakdown, piano, and a wailing guitar to push a song from excellent to epic, not to mention the double bass drum of doom. Even the way each of these guys present themselves exudes metal of all types, meaning there's something for every metal genre fan. You won't be able to stop your head from banging, and your hand will rise to give the sign of the beast without you even knowing it. The band makes each live show a symphonic metal experience, and fans walk away stunned, but what really makes them special are edgy, thoughtful lyrics. There's something about a dark, resonating lyric that can make us all feel so much better.

Okay, when you get to collaborate with Marty Friedman, my all time favorite metal genius, you are automatically in my list of bands to watch. Revocation, you're on my list. The precision is sharp, the grooves are heavy, and the metal is pure. Bass, guitars, and drums are all complex rhythmically, making Revocation a goddamn pleasure to listen to with headphones (and to watch for all the metal head ladies, because these dudes aren't bad to look at). And the solos -- you do not get any better than a Revocation solo, wailing its way into your brain. It's no surprise then that Revocation's guitarist is a classically trained musician. As with most musical acts, no matter how good the records are, live is where you need to truly deliver to earn your stripes. And Revocation does not disappoint. Breakdown after breakdown, these guys amaze audiences with their heavy metal energy and their technical death metal meticulousness. Long hair (except for one hold out) whirling, tight harmonizing, rapidly moving fingers on pointy guitars, and heavy metal energy that doesn't quit, the foursome delivers a sound that would take a few more members in the hands of a lesser band. Whatever you do, please get a Revocation beer coozie that says "for your health."

Rivers of Nihil, a band with the mantra "everything fast, loud, and sad," really delivers what they advertise. A gloom and doom metal of epic proportions brought to you by talented young dudes who know exactly what they're doing. The precision of Rivers of Nihil is just one of the many exciting traits that make them not only a band you want to listen to with expensive headphones, but also a live act worth coming early for. As intelligent as they are energetic, you are sure to leave with a bangover from blast beats that you desperately try to keep up with. And although you might not be able to discern the lyrics live, when you get those Beats By Dre and give this band a deep listen, you'll realize there's some pretty heady stuff here: consciousness, humanity, obsession with youth, and some of your classic metal themes. Excellent drumming, roaring vocals, and general metal-ness are going to shake up your ear drums no matter what, and you'll be left with one thought: this is bad ass, and these are my brothers.

Fit For An Autopsy: Any band with a song that is called "Children Of The Corn Syrup" gets a nod for having a sense of humor -- which isn't always an easy thing to have if you're a constantly touring metal band. But Fit For An Autopsy is not a funny band: with political lyrics about squandered land, the wickeder side human nature and instincts, and American desolation they are more prescient than anything else. Their latest album, which was produced excellently by their own talented guitarist, show that Fit For An Autopsy understands what's happening with our society, and aren't afraid to lay it bare for everyone to see (or hear). That's a tough stance to take in any genre, and Fit For An Autopsy gets major props for spreading the word where most death metal bands sing about non tangible darkness and evils. Or perhaps they just want to riff and solo while the world comes to an end; either way, it's hella metal. Live, these New Jersey dudes are aggressive, confrontational, and stoked by the flames of politics to rage -- a little one on one time or sweat flung from a hair flipping headbang for the front row is not surprising. Singer Nate growls with a beastly presence above brutal drumming, solos, heavy breakdowns, and tremolo picking, bringing politically tinged deathcore to the people. 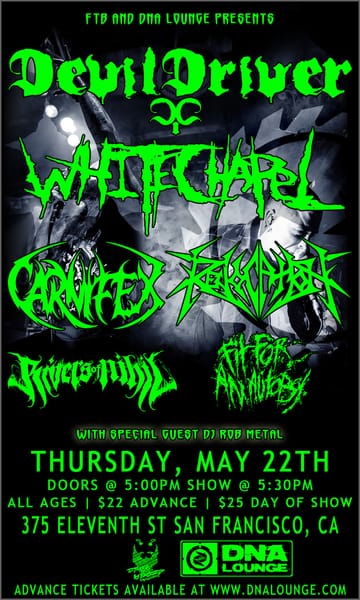 Devil Driver: The Appetite
Whitechapel: Possibilities of an Impossible Existence
Carnifex: Until I Feel Nothing
Revocation: The Grip Tightens
Past related events: