The Dollyrots
The Shanghais
Mark Nelsen Band
Whorhaigh Kayado
The Dollyrots have been around for a long time -- I remember seeing them at a small club in LA during my high school days, and jumping around singing like the crazed teen I was. That's just the feeling that the Dollyrots inspire -- it's all about fun, pop punk youth energy. Now, ten years later, the Dollyrots still hold true to their punk roots, even if they are all married with children now (ok, so I'm not sure if Kelly and Luis are married, but they do have a five month old child together)! They've played with Joan Jett and the Buzzcocks, so you know they bring strong energy to the stage. The three-piece consists of life long pals Kelly (bass, vocals) and Luis (guitar), with oft rotating drummers. They craft short, in your face songs with a tremendous amount of vitality and joy with titles like "Because I'm Awesome," and "Hyperactive." After a decade, it's safe to say that the Dollyrots aren't just a fleeting pop sensation, the band has released five albums (two on Joan Jett's label), formed their own label, and have rabid fans who crowd funded two of Dollyrots album. Being a girl-led band seems pretty tough, but totally necessary for the future: there are far too few women in rock and roll, and Kelly's mere existence helps build a stronger girl musician army. She plays bass with the joie de vivre of a teenager, yet she's a mature, talented musician who knows her craft, writes songs, and maintains a strong connection with fans all over the globe. She's a powerhouse, and is probably toting a really cute baby along for the ride.

The Shanghais: When you channel the best of both modern punk rock and long gone girl groups, you get a rock and roll experience called The Shanghais. These babes are on a mission to bring back the rock and roll fun -- without losing that aggressive punk edge set by the riot grrls who came before them. A little Shanghistory: two ladies meet on the East coast and ended up reuniting in the Bay Area due to a love for rock and roll, Teenage Head, and Oakland. Add a kick ass girl drummer (the best kind of drummer, really), and a token male (Pookie and The Poodles' ever youthful front man Trevor), and the Shanghais were born. They've only been around for a couple of years, but even as a fledgling group they are making waves with their punk tinged garage rock -- a simple concoction of Ramones-like fun with the pop leanings of the Shangri-Las or the Go Gos. Singer Natalie has perfected the emotive head bob, and croons with the help of perfect backing vocals and a driving beat. Just try to listen to punk pop number "Too Cool To Cry" without feeling a little pang of girl power gnawing at you, ready to come out in the form of teeny bopper dancing or at least some toe tapping. Precious pop punk songs clocking at a worthy two minutes or less, you can always make time for a little femme attitude with The Shanghais. Live, the foursome tears it up with bubbly singing, happy-go-lucky riffs, relentless bass, pounding drums, and a little mayhem.

Mark Nelsen Band: Mark Nelsen's debut is a psych pop dream. Well sung, well composed, and delivered with a raw emotion that can only come from an SF native seeing his city change all around him. Sometimes his pace is a country-tinged ramble down a dusty street, which can quickly change to a frenetic anxious pop song. Nelsen runs the gamut of a modern pop musician, relying on his well-crafted, mostly acoustic tunes to highlight his personal songwriting. Definitely a must listen for those folksie indie poppers who gravitate to confessional traveling songs and wispy yet vital vocals. Nelsen delivers his tunes earnestly, singing his feeling directly to the audience while strumming his acoustic. 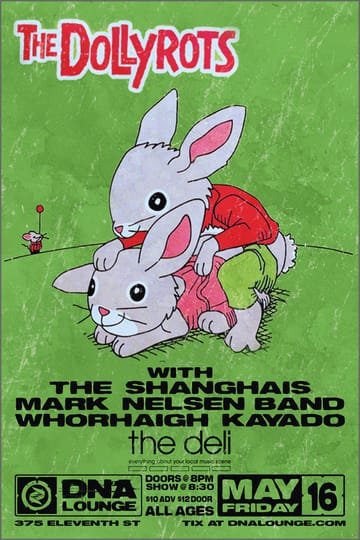 The Dollyrots: Satellite
The Shanghais: Too Cool To Cry
Past related events: