Hed PE
Soil
Sunflower Dead
Short Fuse
Hed PE has a special place in the annals of rap rock, punk, and southern California style -- a misfit band that signed to the same label as Britney Spears, survived the turbulent 90s, dominated KROQ, and yet stayed true to their rapcore roots. It's hard to be taken seriously when you are mentioned in the same breath as Limp Bizkit, but Hed PE sprang from lofty punk ideals and a love for hip hop, and it shows. Hed PE was born out of Orange County and LA's red hot punk rock scene of the early 90s -- the same era and habitat birthed the Offspring, saw the rise and fall of Sublime, and made Social Distortion the steady grandfathers of punk. The southern California area was also a hot bed of hip hop, with Snoop, Dre, even smooth Warren G all coming out of the same area that called punk home. Hed PE is sort of the middle ground where these two styles meet, with some heavier elements thrown in for good measure. Heady lyrics, anti-government warnings, and g-punk style lays the truth bare on a bed of ska punk beats and metal. The myriad of influences are plain to see during a Hed PE set: not only do hip hop and reggae beats co-dominate, but a hard rock sound and lots of heavy metal swirl together to make an enthralling live show with infectiously catchy tunes. Don't be surprised to hear singer Jahred discuss some important topics between songs (we're talking anti-religious, 9/11 truth kind of stuff) before breaking into a death growl or fast paced rap. The flow of energy is strong, even two decades after Hed PE formed they still deliver songs with the utmost care. Whoop whoop!

Ready for some gore infused melodic death metal? You better be, because Short Fuse doesn't do things half-assed, and they are very ready to rock. This six piece from SF makes bringing a heavy, buzzy assault of melodeath look easy, when in fact composing melodic death metal is anything but. You need to properly honor heavy metal, sing and scream with guttural intensity, and get all the effects right for an all out melodeath performance. Luckily, Short Fuse has been doing this long enough (almost a decade!) to know how to pull it off without a hitch. They are relentless in their musicianship: pounding drums, heavy riffs, and even electronics that might not fly in a typical melodic death metal group. These are classic metal heads delivering a cinematic blend of the subgenres with enough energy to keep any metal lover happy. Death growls are placed delicately (if that's possible) on top of keys, virtuoso guitar solos, blast beats, and some powerful, in-unison head banging. See the hair fly on stage with beast-like intensity while Short Fuse delivers a no holds barred set of heavy, grinding metal songs that will burrow deep inside of you and live there for at least a few days after the show. 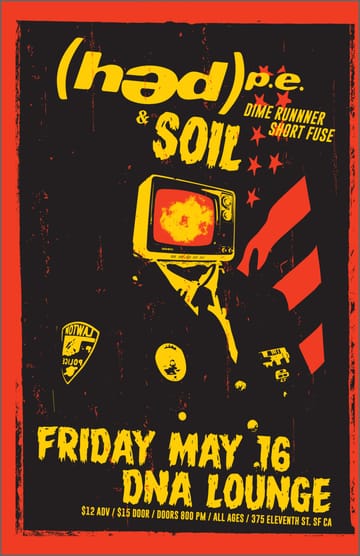