Skid Row
Black Star Riders (The New Thin Lizzy)
State Line Empire
The Devil In California
It ain't every day you get to see rock legends perform, so I'd advise you to jump quickly at this chance to head bang with classic 80s rockers Skid Row. Skid Row, at their heyday, had their thumb on the pulse of what the youth wanted: loud, fast, metal-influenced rock and roll with the common themes of the decade: sexy girls, partying life, and just your everyday monkey business. Of course, the line up isn't the same (Sebastian Bach, aka guitarist/dad from 12 episodes of Gilmore Girls, hasn't been in Skid Row since 1996) but that does not mean these dudes are taking it easy. They bring the rock and roll spirit to the stage for every show. Lead vocalist Johnny Solinger is a true hard rock vocalist, with the ability to reach classic heights, engage the audience, and sound pretty cheerful even while growl-singing, "get the fuck out." It's not easy to be a replacement singer, you get a lot of heat and there's not much you can do about it-- but Solinger is a talented champ, and fits right in with the current lineup. Three out of five original members is enough to deliver solid, classic rock with gusto, and there's something to be said about sticking to your guns which Skid Row has done for all these years. The band delivers hard rock with the energy of a much younger group: guitar solos wail, hair flies, heads bang, and every note -- for both new songs and old tunes -- is hit just right.

Black Star Riders: This is how a band continues to build a legacy after it is ripped from them by circumstance. I'm talking about Thin Lizzy's evolution into Black Star Riders, which allows them to make music without cries of "TOO SOON!" by fans of Phil Lynott's Lizzy. Even after their break-up and Lynott's death, Thin Lizzy's original members toured, playing from their amazing catalog, but never released any new music out of respect and because it just wouldn't be the same Thin Lizzy. These guys could have released new music just to cash in on the Thin Lizzy name, after all bands that lose members do that frequently, but somehow resisted that urge. Of course, Lynott died more than 25 years ago -- and that's a long time to go without making original music. So with a fresh name and some old faces, Black Star Riders was born. The characteristic double lead guitar sound, the rock and roll vibe, the Irish attitude -- it's all here, with catchy pop compositions that are definitely going to be stuck in your head. Obviously, this band is a tried and true group of talented musicians who have been doing this rock and roll thing a long time. Black Star Riders are paying homage to not only their fallen comrade Phil, but to all the rock stars that were lost too soon -- and it makes a rock and roll fan feel pretty good about listening to this new, yet not new, band. Audiences are in for a treat, because these are all legendary musicians who are still at their technical peaks, playing well-crafted rock songs that appeal to everyone. And, rock and rollers rejoice, expect a few Thin Lizzy songs to really get you moving!

State Line Empire: It ain't easy being a new heavy rock band. But having Slash play on your first record -- well, that's a mighty big foot in the door. State Line Empire, a four piece from the Golden State, formed in 2010, but it wasn't until they won a Guitar Center contest that allowed them to work with Slash and top metal producer Mike Clink that they added fuel to their own heavy metal fire. They recorded an EP of high octane, fun, classic rock-inspired songs, opened for famous heavy hitters such as Billy Idol and Sebastian Bach, and even performed at the West Coast Fighting Championship. They tightened their live act with weeks of touring up and down the California coast. Not bad for a local band who play because they enjoy it. State Line Empire embraces a slightly 90s alternative hard rock sound, in the vein of some of their influences like Metallica and The Deftones. Their metal edge is perfectly balanced with catchy melodies -- making State Line Empire a joy to hear and see. The band brings their no holds barred, straight up rock and roll sound to the stage with a blast of energy, practiced musicianship, and a love for the classics.
Photo Gallery: 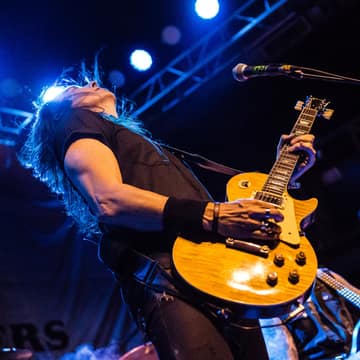 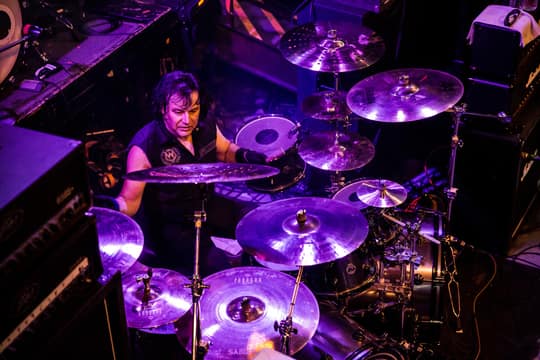 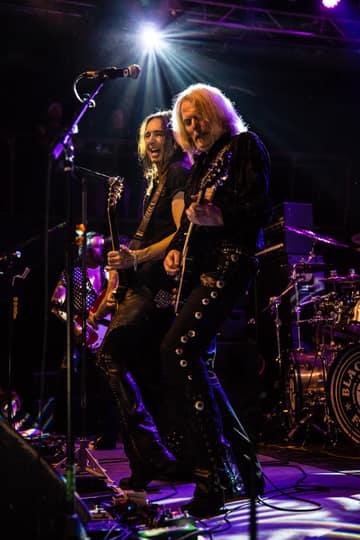 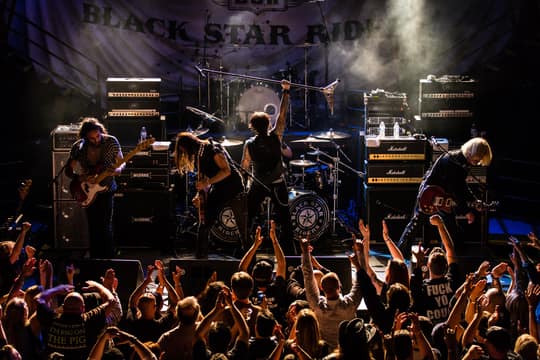 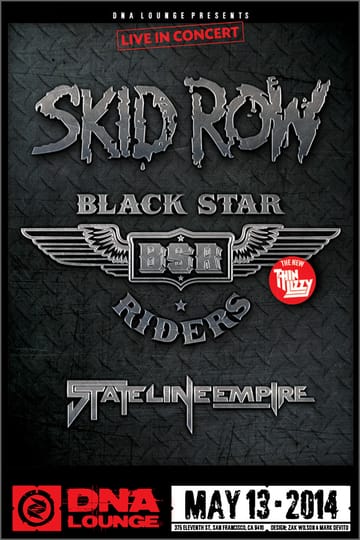