Blessthefall
Silverstein
The Amity Affliction
Secrets
Heartist
Blessthefall brings metalcore to the people with a new album, charged live performances, and an overall energy that this scene craves. This five piece comes crawling forth from the deserts of Phoenix, home to similar acts (Scary Kids Scaring Kids, Eyes Set To Kill) which makes me think the skin melting sun has something to do with the formation of epic post hardcore acts. Either way, Blessthefall is bringing their own style to the genre with some actually singable, tenor vocals along with brutal death screams by singer Beau, and some hip synth usage along with the standard metalcore delights: hard hitting bass lines, blast beats, heavy guitar, excellent backing vocals, and Christian faith influenced lyrics. These boys have been at it for a decade, so you better believe they are delivering tight, well-worn classics along with their new, synth-ier tracks -- and they sound good, they sound like guys who have been playing together forever, and know how to build off each other. Live, you can really tell that Blessthefall enjoys what they do with the members energetically bouncing, screaming, head banging -- even some stage diving if you're lucky. After a few summers doing Warped Tour, you're going to get pretty good at all that stuff! Do not be surprised if some sort of circle pit develops.

It seems that a band named after children's author and dirty genius Playboy writer/under the radar lyricist Shel Silverstein must walk that wonderful, fine line between grace and filth -- luckily for us Silverstein steers clear of both, opting instead for pure post hardcore. This Canadian band has been walking the metalcore, screamo line since 2000 -- they are basically elder statesmen in the ever growing scene that caters to the loud and the young. There's a reason they've been around for so long: Silverstein provides an iconic sound and live show that is a high water mark of the post hardcore genre. The five piece isn't afraid to try new things: in 2012 they released the "Short Songs" EP with 20 tracks, each under 90 seconds. Deep concepts seems to come naturally to Silverstein, with their latest work focusing on parallel storytelling (Shel would be proud) about how a life can change due a single event. The band brings a pop punk element to the metalcore/post hardcore, both with the vocal delivery and instrumentals and an overall fun vibe to a genre that can get pretty dark. On stage Silverstein shines -- delivering well-crafted tunes without a hitch, even if numerous fans decide to jump on stage before diving back into the crowd. It's no surprise they have rabid fans, the band has earned it.

The Amity Affliction is Australia's answer to the worldwide siren song of post hardcore. With aggressive guitar, pounding drums, crunching bass, and two singers (one for clean vocals, one for the must have guttural death screams), the band is sticking firmly to the sound that got them noticed while just dipping their toes into richer territory. The Amity Affliction's latest release explores a deeper, more personal place filled with anxiety, self-doubt, depression, and darkness -- mainly due to the primary songwriter's brush with death during a Warped Tour stop in Pittsburgh. But don't think these Aussie's are downers. Live, the band is an energetic trip to a time when post hardcore was simply good songwriting mixed with great delivery, without the trendy stuff that comes and goes. Each member seems to pour heart and soul into their onstage craft, with all the sweat to prove it. The Amity Affliction brings sing along moments, technical perfection, stage dives, and an overwhelming rock and roll spirit energy. Crowds thrive on that energy.

Secrets, straight outta San Diego, is loud, aggressive, metalcore at its best. Velocity/Rise Records, king of the alternative and post hardcore labels, signed the band before their debut after listening to a few tracks. Featuring one clean singer (and guitarist) and one straight up scream growler, Secrets is making some finely tuned, catchy post hardcore songs. Although their new album is called "Fragile Figures," the music is anything but fragile. The band delivers angst-driven melodies, poppy choruses, dark lyrics, unparalleled vocals, and exciting songs for fans of the scene, despite the fact that they changed unclean vocalists between their two records. Secrets' "Fragile Figures" even charted on the Billboard 200, which is a feat for any artist, let alone a post hardcore band in a world dominated by Disney soundtracks, country, sappy alt.rock, and straightforward pop. When Secrets hits the stage, the audience will be dominated by a flurry of long hair flying in unison, head banging, jumping (also in unison!), a feeling of chaos, and metal-fueled rage.

Post-hardcore metal band Heartist was only birthed about three and a half years ago, yet have amassed a slew of fans on the strength of one EP, with the promise of more songs this summer. Heartist was formed from the ashes of several other bands, and includes a former touring drummer for metalcore flag bearers Norma Jean. The group signed to Roadrunner Records (also the home of Hollow Bodies tour mates' Silverstein and The Amity Affliction), a Warner subsidiary metal label which happens to have metal legends Opeth and Ratt (as well as Korn, Nickelback, and Sammy Hagar) on their roster. So the pressure is high, and Heartist delivers with vicious riffs, emotional songwriting and singing, finely crafted melodies, and even some electronic elements. They aim to be a musical melting pot, and hit the goal squarely on the nose. Vocals soar to amazing heights and guttural lows, guitars are played savagely, and the drumming is commanding. The live show is a big ball of energy, with these Orange County boys sharing a little piece of themselves with every audience member. Songs are powerful and poignant, despite the epic metal that surrounds them, and you'll be able to feel it in your heart and bones. 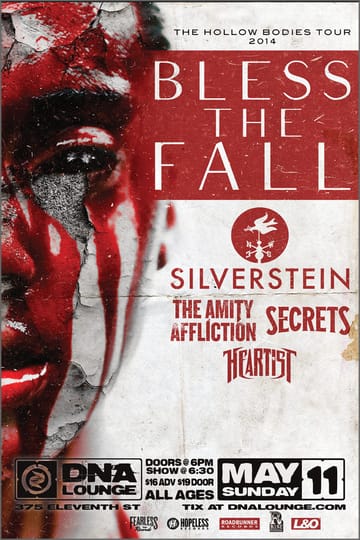 Blessthefall: You Wear A Crown But You're No King
Silverstein: Massachusetts
The Amity Affliction: Greens Avenue
Secrets: Ready For Repair