Decay
April 25th marks a rare performance of solo material by Valerie Gentile, one of goth and industrial music's most prominent guitarists of recent vintage. Gentile's new solo work follows on a long career of touring and recording with such luminaries as The Crüxshadows, Angelspit, and Black Tape for a Blue Girl. Her 2013 debut solo EP, "Love Is Luxury", swims comfortably between classic goth-rock and modern industrial dance, with dark new wave-tinged songwriting and sharp alto vocals throughout.

For this special one-time performance, Valerie will reunite with members of the local artisan disco-hair association Everything Goes Cold to perform her solo work along with music from their upcoming album, "Black Out the Sun", despite having been compelled to perform with them nightly for an entire month in 2012. 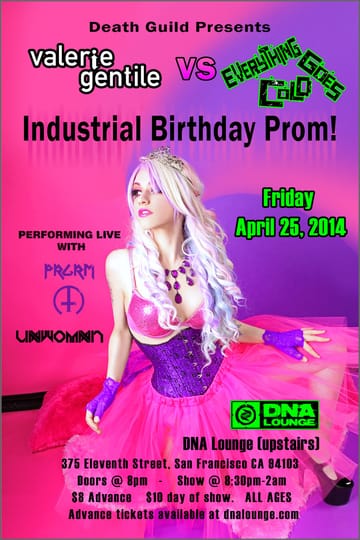