Modern Man
Buzzmutt
Baus
There's a special place in the collective heart of rock and roll for female drummers. This is especially true with Modern Man -- drummer Nikki brings sugar and spice and a whole lot of punk attitude to what otherwise could be another all male shoe gaze garage band. There's definitely a psychedelic lean to the avant garde shoe gaze of Modern Man, one that the band has decided to call "Sleaze Gaze," a perfectly fitting name for this bay area (via South Carolina) band. Modern Man is exciting -- the music hits you right in the soul. The foursome fit right in with bands like Blank Dogs or an early Cure, or as the soundtrack to a cold day off spent smoking and philosophizing on an Oakland porch stoop. The fuzz is artistically placed (aka everywhere) in the Modern Man sound, paired with crunchy distortion and vocals that sound lost in the haze of noise. Where most shoe gaze type bands are dull, Modern Man brings a new sense of the genre, incorporating elements of prog-gy garage: rhythmic bass with a solo here or there, long stretches layered instrumentals, changes in mood (from semi-optimistic to downright doomy). Live, expect a dark wave of reverb and noise with intensity all around. You can get lost in the songs until they completely change course, a perfect way keep the audience on their toes.

Instantly catchy, this SF band is sure to keep your head bobbing. Harmonized vocals, driving instrumentals, all rhythm, no filler, and some extra fancy chaos make Buzzmutt an interesting band both live and on record. Don't be weirded out if the singer decides to shout through a megaphone, or if the record sounds even better on tape than on the internet (that's just the way these things are!) -- this is Buzzmutt, they're here to entertain you with dark rhythms, fuzzy harmonies, experimental sounds, and a major sense of cool. The connection between the five dudes is palpable, and they are producing some very Wolf Parade/Sunset Rubdown-esque music. Buzzmutt are sound builders, taking feedback and fuzz and marrying them to pop sensibility and unafraid of experimentation. Like a real mutt, these songs are mixtures of all different kinds of noises (from chimes to far away beats) crafted into something loveable. There is an artistic method to Buzzmutt's song building -- like a painting, each element is used and then further built upon to create something bigger and better. The songs are involved, repetitive and rhythmic, perfect for your average stoner or your serious music nerd to enjoy, beverage in hand, dancing.

No Wave doesn't always play well with others -- but for Baus, the genre is just the right starting point for their blend of post-punk, scuzzy rock grooves. Baus, as a live act and on record, are all over the place musically -- but one thing is certain: they're damn fun to listen to. The funky punk threesome hails from the ever growing music capital of Oakland, CA, and are ready to take on the world -- or at least their little part of it. The band's latest work, "Idol Minds," was recorded by garage rock mainstay Andy Human, and is five songs of unadulterated energy. Baus makes fast, tight rhythms balance with a boy-girl harmonies and punk attitude, evoking the left of the dial punk and alternative bands from the 1980s. There's a definite aggression to Baus, but it's more exciting than life threatening. Live, the three-piece delivers jagged solos, shouted vocals, a ton of punk rock, a little levity, and opportunity to let all your worries float away on a river of fast and loud riffs. 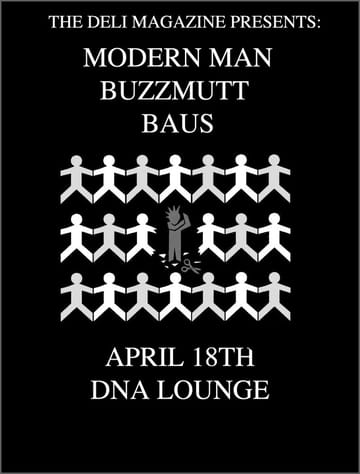