La Femme
Vela Eyes
Here Come The Saviours
La Femme: France is a beautiful place, so it's not surprising that beautiful indie psych music would make its way from the country and into our lucky ears. It is a little surprising that there's such a surfy aspect to it, because one is predisposed to think that psychedelic surf rock is exclusive property of Southern California garage enthusiasts. La Femme does a great job at it, however, with sounds that build into a holy trinity of perfection: slight punk attitude, carefully crafted songs, and outstanding (French) wit. Anyone who names a song "From Tchernobyl With Love" is alright in my book. The fivesome make classic indie songs in a lilting manner -- don't expect to be overwhelmed with energy, but do be pleased to surf the wave of sounds, backed with synths, cute French boy-girl vocals, and the aforementioned slight punk attitude (you get some déjà vu of early Cure, too). Handclaps, sweet girly vocals, and some ye ye type of musical musings, give La Femme a slightly twee feeling, too. Live, you'll see a row of keyboards and singers that drives this band, followed by the rhythm section that provides the backbone -- and if you're lucky you'll get a little surfy dance that belongs in a Beach Blanket Bingo movie. It's precious but retains an edge, overall a pleasant look into the life of French indie kids who make music you can take drugs to.

Vela Eyes: San Francisco's Vela Eyes are self-proclaimed Stargaze indie rockers. Stargaze must be the opposite of shoegaze, or at least it's a happier version of the genre. Boldly sung, sweet, and deep vocals are the main attraction of this talented fivesome, backed by classic indie instrumentation, electronic sounds, and synths that give Vela Eyes that shoegazey feel. This is an intelligent, new version of indie punk, a version that knows how to use programming to make interesting, full sounds...a version that knows that being sweet is going to pay off. And boy does it -- Vela Eyes is a pleasure to listen to. Professional, well-crafted, at times dark, this is a band to watch because they know exactly what they are doing. Live, the band gets its lush sounds across with ease, lending a psychedelic feel to the set using two guitars and (at times) two singers. The harmonizing ladies make Vela Eyes a thing of beauty, both live and on record -- the band feels like a family. It doesn't hurt that this band is full of attractive young people, who bring that youthful energy out and share it with the audience. 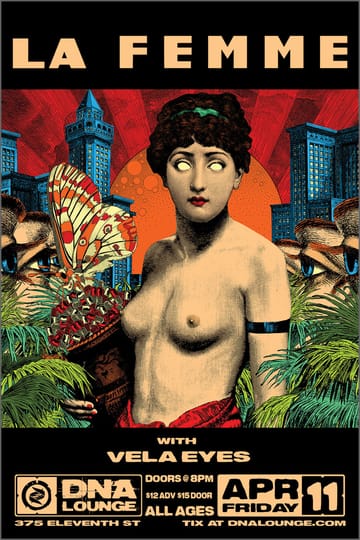