Kidd Sysko
DJ Sky
My Crazy Girlfriend (performing live)
My Crazy Girlfriend: Pop music is supposed to make you get down and go crazy. So do you wanna get crazy with some twin brothers and their hot friends? Look no further than My Crazy Girlfriend. This foursome prances and sings to beats made by the Armstrong twins with lyrics that consist of some dirty words that almost sound like love songs coming from these beauties. Like Britney Spears with a J-pop twist and some major trust issues, this electro pop duo brings some sweet party jams to the table. Think Iconapop or FannyPack: modern, fun mainstream pop with a slight edge. Los Angeles can be a tough proving ground for anyone, what with all the wannabe actresses and rock stars all struggling for the same thing: fame. The group sprang forth as the four artists struggled to make it on their own -- one day they just decided to harness the power in numbers and My Crazy Girlfriend was born. This group has it all: danceable beats, sweet as hell girl rap, sex powered energy, and delightful pop vocals. Live: get ready for bright colors, tight party clothes, and tongue in cheek dance numbers as you swirl around in a sea of fellow dancers.

DJ Kidd Sysko: San Francisco's Kidd Sysko has been spinning his wild mash up of pop music for more than a decade now. With energy, creativity, and a whole lot of listening to good music to find that perfect fit, Sysko is crafting dance ready DJ sets that the kids are going wild for. Anyone with two feet can go wild for Kidd Sysko, actually. He's already made a splash at gay events across the bay, and has opened or closed for huge artists like Gaga and the artist formerly known as Ke$ha. Electronic dance music mixed with mainstream hits from the past three decades creates a pastiche of instant classics that will take you far into the night -- don't be surprised to hear your forgotten favorite from 1999 sandwiched between some top notch, hand crafted sounds and todays big radio hits. 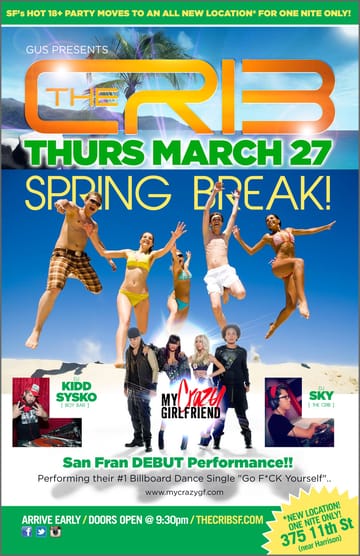 My Crazy Girlfriend: Go Fuck Yourself
Past related events: