We Butter The Bread With Butter
King Loses Crown
Honour Crest
Lions Lions
When it comes to German death core, you can't get any more German, or any more death core, than We Butter The Bread With Butter. Okay, that phrase probably is way more clever in German, but it has a certain ring to it that is promising even to the unsuspecting American audience of death core fans. After all, Germany brought us Rammstein and Tokio Hotel (and their fans will not be disappointed with scream styles of WBTBWB). We Butter The Bread With Butter is about as deep as puddle, but boy is it fun to splash around in - literally, you'll be drenched in sweat from the dancing and head banging once these guys take the stage. German isn't my first language so they could be spouting some very profound philosophy... but we'll never know, we're going to have to rely on feeling and soul here!

Both live and on record, We Butter The Bread With Butter is an amalgam of bro dubstep industrial metal that is intricately woven with synths, orchestral electro-goth intros, blast beats, and a death core scream that makes my throat hurt vicariously -- this is the type of live show that will get any fan amped, whether you are new to the world of bro metal or a seasoned advocate. It's serious music for people who want to let loose. It's like American screamo on PCP. Or it's like an updated electro-take on Germany's own Scorpions with even more penchant for drama. Yes, WBTBWB will indeed rock you like a hurricane (sorry, we couldn't resist).

King Loses Crown: Darkness? Check. Punk rock delivery? Check. Electronic? Check. Danceable? Double check! Local boys King Loses Crown are ready to make their mark in the dark dance rock scene with power and noise. King Loses Crown is droppin' beats as good as any dubstep influenced rock and roll band, but with a goth electro vibe that is channeling some of our 80s favorites. At the craziest moments, the band almost sounds like a scary version of the B-52s (believe me, once you hear it, you can't unhear it), complete with catchy vocals, riffs that make you move, and crazy effects.

As a live three piece act, the band features amazingly aggressive drums and guitar propping up the fantastic electronic components that make this band unique. The songs are science fictionesque paeans to the darker human emotions with titles like "Your Blood", "Let This Be A Warning", and "My Revenge". King Loses Crown walks a delectably thin line between fun and scary, but stays listenable the entire way. Fans of The Faint, Devo, and NIN are going to be quite at home in the crowd, especially if they are ready to shake.

Honour Crest: Screamo is back, and the Honour Crest boys are carrying the flag. This band is probably the most metal thing to come out of Virginia Beach since...well, it's a very nice town -- I don't know how a metal band with this level of enthusiasm sprung forth. But luckily for us, they did, and they attracted enough attention to make it onto the Rise Records' (home of Early November, Hot Water Music, and 7 Seconds) roster.

The level of scream you get from lead singer's Luke is unparalleled in its rawness -- the emotion is there for all the listeners to decipher. And the orchestral elements, surprisingly clean lyrics, backing scream harmonies, smart instrumentals, all add fuel to the fire of Honour Crest. These guys are bringing a new energetic twist to metal core. It's not surprising that a band who is so good at the internet (they post all the good memes first) met on Myspace back in that far forgotten era. Indeed, you can tell some influences from both Myspace's and nu-metal's hay day, the early 2000s, are layered into the band's releases. This is a live show that promises to not only make you dance (or at least jump around and headbang in unison with the band), but to also make you think. But I wouldn't expect any less from a band that named a single after Harry Potter's "Horcrux".

Lions Lions: A rock and roll band has to be like brothers to survive, especially when formed from the ashes of several other bands. Lions Lions decided to take that myth one step forward -- and named their band after the king of beasts because "Lions live together, hunt together, eat together -- pretty much do everything together". These beasts bring fans some fresh meat in the form of heavy, dark, aggressive metal influenced tracks scream pop, and a super intense live show, with harmonies and some fantastic if far too few electronic elements to brighten up the set.

The Lions Lions' musicians are all experienced at their craft, and it shows. Fans of post hardcore music and bands like Thrice will love what this pack has to offer. Endless jumping, breakdowns, Saves The Day-esque vocals, a stage dive or two, some rare growls, and the most goddamn energetic guitarist known to man will make Lions Lions an act that is worth coming early for. This band is not only paying homage to the post-hardcore and emo of yesteryear, they are delivering a solid new version of the brand. Hardcore, metal, fun -- these words don't typically describe big cats...but Lions Lions embodies all three. 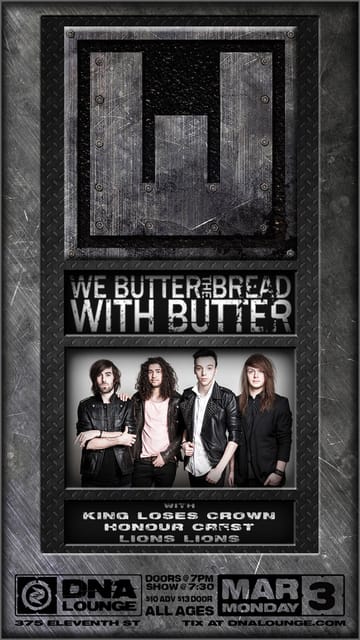