Floor Seating gets you a chair downstairs on the main floor.

Balcony Seating gets you a stool along the upstairs railing.

Table Service includes a reserved booth downstairs, admission for 6, a bottle of liquor, and a selection of appetizers.

Standing Room is at the back of the room near the bar, or upstairs behind the DJ booth. Once the advance tickets are sold out, a few standing-room tickets will also be sold at the door.
As the Palaces Burn is a feature-length documentary that originally sought to follow the band and their fans throughout the world, to demonstrate how music ties us together when we can't find any other common bond. However, during the filming process in 2012, the story abruptly took a dramatic turn, bringing the band into a Kafkaesque nightmare, when lead singer Randy Blythe was arrested on charges of manslaughter, blamed for the death of one of their young fans in the Czech Republic. What followed was a heart-wrenching courtroom drama that left fans, friends, and curious onlookers around the world on the edge of their seats. In select theaters February 2014. 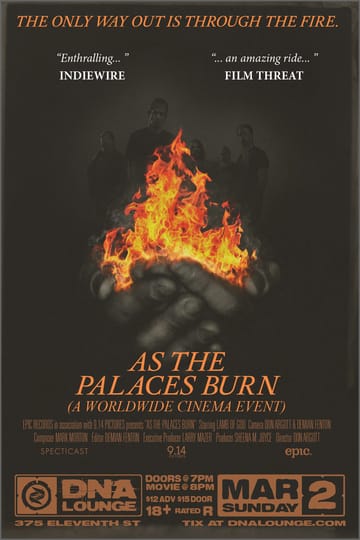 Lamb of God: As The Palaces Burn Documentary Trailer