Norma Jean
Vanna
KENmode
The Greenery
Name
Atlanta-based Norma Jean (est. 1997) is a fine example of metal at its most pure. Cory Brandan roars into the mic, while guitarists Chris Day and Jeff Hickey keep the sound going and Clayton "Goose" Holyoak (drums) and John Finnegan (bass) pound away with a brutal beat. In 2006, Norma Jean was nominated for a Grammy for Best Recording Package for their album O' God, the Aftermath. Since then, they've successfully put out several albums and continued to win fans with their intense on-stage performances.

Norma Jean's latest release, Wrongdooers, their sixth full-length album, finds the group hearkening back to the heaviness of their early work, crafting possibly their most aggressive record yet, but in a new way that is anything but a retread. Another critic says, "If you had ever written the band off or traded them in for a younger model, this is the record that will force you to reconsider and repent. If anything, age has revitalized Norma Jean, and on Wrongdoers it shows." 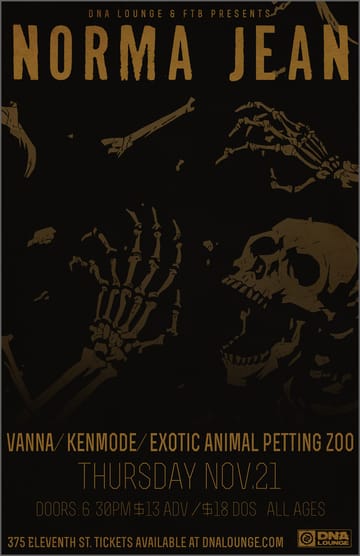 Norma Jean: If You Got It At Five, You Got It At Fifty
Vanna: Year of The Rat
Ken Mode: Your Heartwarming Story Makes Me Sick
The Greenery: Faceplant
Past related events: