Join Charli XCX after her show at Slim's for an intimate after-party!

With DJ sets by:

"Before, it felt finished. Now, it feels perfect. It feels like a proper thing."

The proper thing on the mind of 20-year-old shooting star Charli XCX is an album long in the making, one which finally sees the light of day in 2013. The wait has been as agonising for Charli as it has been for her fanbase -- rapidly swelling on both sides of the Atlantic -- but patience has paid handsome dividends. The debut album she releases in 2013 -- perhaps unlike the album she could have released in 2012, or even 2011 -- finds XCX's vision fully realised. Sweeping synths, crunchy beats, emotive vocals, coy raps, spiky and persuasive lyricism and big ideas about life, love and everything else: The album tracks (and soundtracks) Charli's journey from teenager to young woman, but deftly swerves coming-of-age cliches. 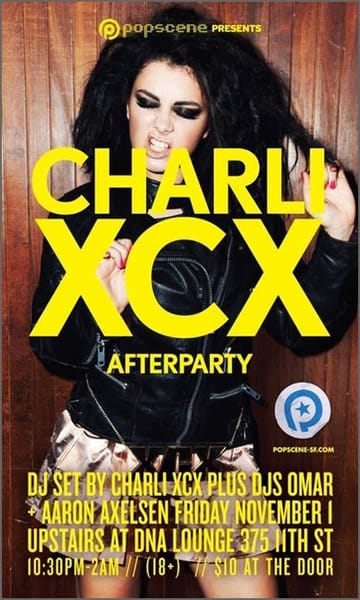