Fucked Up
Tony Molina
Taxes
Hailing from Toronto, Canada Fucked Up has completed a merge long sought in todays musical scene. Taking indie style chord progressions, guitar and drum sounds and combining them with an edgy hardcore vocalist that appeals to fans of both genres. Featuring members from hardcore bands Ruination, Career Suicide, and No Warning who have dumped their many talents into recording dozens of releases including a split that came out this year featuring The Melvins song "Rat Faced Granny", on side A and Fucked Up's "21st Century Cling-Ons", on side B.

Touring in support of their Critically-acclaimed 2011 studio release "David Comes to Life", who's plot consists of a rock opera set in late 70s early 80s England where a lightbulb factory worker "David", falls in love with an activist "Veronica", who is later killed after the couple build a bomb and try to bomb the factory. While David is remorseful for spending so much time with Veronica he feels guilty because he fells as though he caused her death. The story continues through 4 acts with an explosive conclusion. "David Comes to Life", is the first album from Fucked Up to chart on the Billboard top 200. 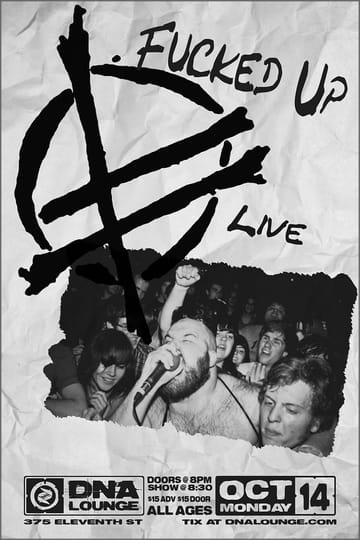 Fucked Up: Queen of Hearts