Icky Blossoms
Return to Mono
Metal Mother
Sit Kitty Sit
Icky Blossoms are a bright and aggressive electropop/rock trio that bloomed in the 2011 blizzards in Omaha, NE. Consisting of singers/multi-instrumentalists Derek Pressnall and Nik Fackler and singer/synth player Sarah Bohling, Icky Blossoms draw from old friendships, rhythmic experiments, and a love for robust melodies to create music stretching from hazy pop to pulsing dance. It's music that feels familiar yet so slightly off, like the sun heating your face, old haunts, or falling in love.

Their rhythm tracks are tight and pumping, but where most other club-friendly groups insist on productions that are compressed into a solid, relentless flatline of sound, Icky Blossoms maintain a sense of space and dynamics. It's an artful approach that allows for greater variety and a series of left turns.

San Francisco trio Return to Mono are anything but monophonic. Their catchy guitar riffs, strong vocals, and solid synths form a fully fledged and fully phonic electro rock sound. On their latest album Framebreaker, crunched beats are supported with warps and thick slabs of sizzling Moog, along with the occasional shredding guitar riff. Leading lady Tanya Kelleher lends indie pop dynamics to the mix with her vocal style sitting somewhere between Garbage's Shirley Manson and the Noisettes' Shingai Shoniwa.

San Francisco duo Sit Kitty Sit, takes the stage. It's a pretty girl in a cocktail dress, and a handsome guy in black jeans. Simple. Unassuming. You would never suspect that those two blue-eyed babes up there were classically trained music geeks - the kind with braggy diplomas who understand weird jokes about fermatas and neopolitan 6th chords. The kind who don't just love to play, but are unquestionably compelled to invent. Armed only with piano and drums this fiery team lets loose an expertly manipulated balance of power rock and intricate classical/contemporary nerd-ism that leaves audiences anything but silent. 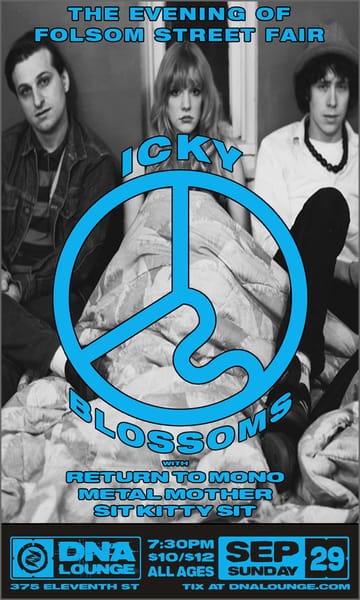