Tap Turnover is a monthly event at DNA Pizza that will introduce new featured craft beers from different breweries and styles of beers.
Lagunitas Brewing Company was founded in 1993 by Tony Magee in Lagunitas, California and moved a year later to nearby Petaluma when they quickly outgrew their original rural West Marin location. Since then they have grown to be the 6th top selling craft brewery in the country and having announced that they will soon be expanding to Chicago.

Lagunitas will be joining us with a number of selections from their award-wnning beers!

Lagunitas representatives will be making presentations about their beer and brewery at 7pm. Come in, get your flights, grab a slice and take a seat to learn all about Lagunitas and these fabulous beers. 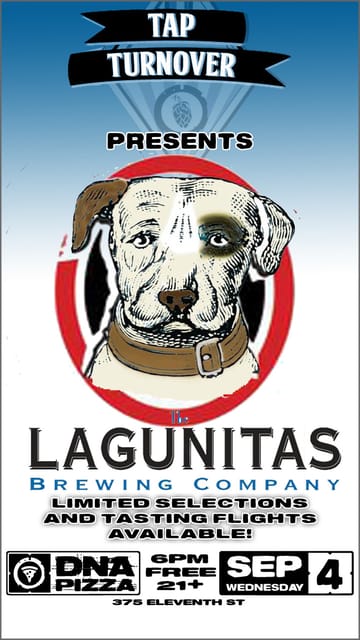