Free "Bootie Mashes Michael Jackson" CDs to the first 100 people!
Bootie celebrates Michael Jackson's birthday with an evening filled with mashup tributes to the late, great "King of Pop." DJ Freddy, King of Pants comes down from Bootie Seattle to join DJ Tripp and Dada on the decks, as they all sprinkle in MJ mashups throughout the night. Live on stage at 11 PM, Bootie's house band Smash-Up Derby reimagines what it would sound like if Michael had fronted such bands as Nirvana, Guns N' Roses, and The Hives!

Local faux queen Holy McGrail takes to the stage for a special "Free Willy"-inspired Michael Jackson Midnight Mashup Show, while upstairs in Above DNA, MOM DJs (Motown On Monday) Gordo Cabeza and Timoteo Gigante bring their mix of Motown, soul, funk, and disco, with a focus on original remixes and edits of timeless songs. John!John! seizes control of the Lounge to throw a kooky party where anything can happen, and finally, there will be free "Bootie Mashes Michael Jackson" CDs for the first 100 people through the door! 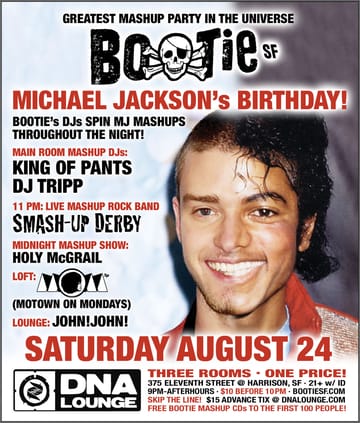