Davey Suicide
The Defiled
Awoken Shadows
Davey Suicide is working to set the world ablaze. Together with bandmates Frankie Sil, Drayven Davidson, Needlz, and Ashes, they distill heavy metal, industrial, and punk into anthems that are as corrosive as they are catchy. Inspired by groups like Guns N' Roses, Pantera, Metallica, Marilyn Manson, and Eminem. Suicide learned one important thing from these icons: move from the East Coast to Hollywood.

What you see is what you get, and Suicide isn't pulling any punches. Targeting hypocrisy, his incessant preaching courses through the synth snarl of "Sick Suicide" and the stomping riff bitchslap of "Grab a Gun & Hide Your Morals." On-stage, it comes together with a brutal bombast. For Suicide, the show is paramount. "We've assembled five guys who are each frontmen in their own right," he says. "I wanted to have the chamber fully loaded and fire all the bullets at at once. That's what we're about to do." 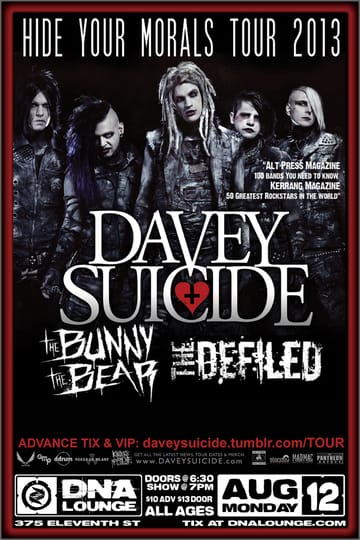