Free Bootie mashup CDs to the first 100 people through the door!
Outside Lands too crowded or too expensive? Or you're going but you still need more? Then come on out to Bootside Lands! Bootie will be playing Outside Lands artists throughout the night, but with one big twist -- of course, they'll all be mashed up! It might not be the "real" thing, but it's WAY cheaper and you won't get sunburned! Taking the stage at 11 PM for a special live Bootside Lands set will be More Cowbell, from Austin, Texas -- voted "Best None of the Above" band in the Austin Chronicle Music Awards. Since 2006, as one of only a handful of "live mashup bands" in world, More Cowbell has gained a loyal Texas following, with a consistently high-energy show and a unique style of mashups and covers that usually has the audience both laughing and dancing at the same time!

On the decks in the Main Room will be resident DJs Mykill and Entyme, who will be joined by special guest Spencer4Hire from Bootie Boston, spinning the best mashups in the universe late into the night! For the Midnight Mashup Show it's the Bootie debut of Minneapolis drag star Esmé Rodriguez, doing a special Outside Lands-inspired number. Upstairs in the Lounge, Blaque Panther Disco brings their sound of electronica, indie-dance, and nu-disco to San Francisco, while in Dazzle Room, Ya Mamma's Basement takes over, where Myster C & Mr. Washington spin the hip-hop and R&B to get you bumpin' and grindin' on the dance floor. 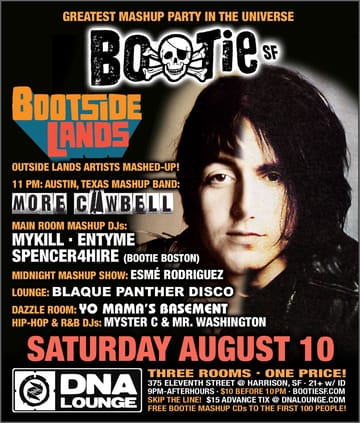