Tap Turnover is a monthly event at DNA Pizza that will introduce new featured craft beers from different breweries and styles of beers.
From a brewery that began as a union between a couple of brother in laws experiments in making a better beer, Firestone brewery has become a world renowned brewery winning numerous awards for their fine craft beers.

Based on classic brewing traditions from Burton-Upon Trent, this bizarre and unlikely system of linked barrels has the ability to produce rich and complex ales.

Firestone brewery will be presenting a selection of their award winning beers along with 2013 and 2012 Double DBA. Double DBA is their flagship beer DBA at twice the strength and oak barrel aged. We will be offering verticals of these along with flights of other Firestone products.

Firestone representatives will be making presentations about their beer and brewery at 7pm. Come in, get your flights, grab a slice and take a seat to learn all about Firestone and these fabulous beers. 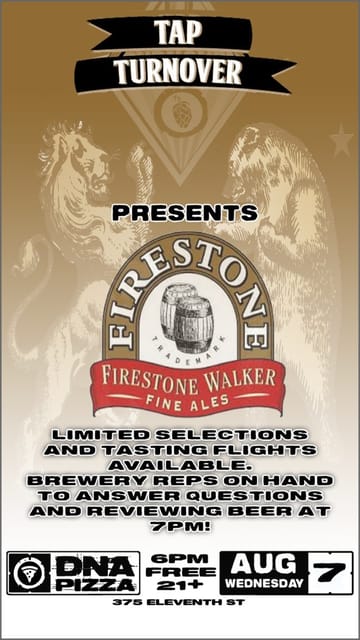