Monsters Scare You
Speaking The King's
Set To Reflect
Monsters Scare You is a post-hardcore/electro band from Seattle, WA formed 2008. In their short existence they have created an enthusiastic fan base with their combination of pop, metal and electronica. Their sound has been compared to Attack Attack!, Asking Alexandria, and Enter Shikari.

Members Cory Fay, Brandon "Bird" Ereth, Connor Theisen, Josh Benson, Joey Duckett, and Chad Keller have been enthralling fans with their energetic no-holds-barred stage shows and deliciously catchy tunes. MSY pound out original tracks on guitar, bass, drums, and keyboards. This tour will be featuring many songs from upcoming debut full-length release "Die A Legend", as well as rocking out songs from previous EPs "Teratophobia" and "Monsters Scare You" and single, "Shut Up Our Song is On." 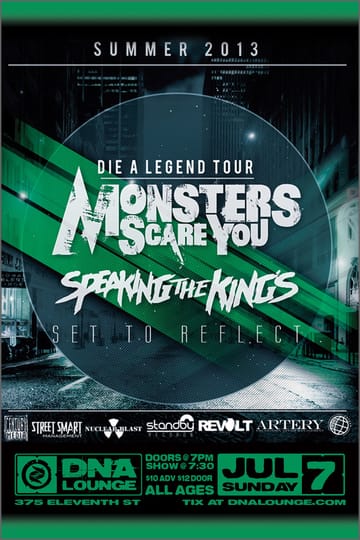 Monsters Scare You: Give Me Some Sugar Baby
Speaking The King's: Casanova