The post-show meet+greet ticket includes admission to the show, and a tour poster that Big K.R.I.T. will sign for you!
Big K.R.I.T. is the sole producer of his debut album Live From The Underground which serves as a testament to his multifaceted musical talent and overall artistic vision. His major label debut was released on the heels of two critically acclaimed independent releases, K.R.I.T. Wuz Here and returnof4eva which featured Ludacris, David Banner and Bun B. newcomers.

"I'm reintroducing a type of sound from the South that a lot of the newer generation doesn't know about and reminding the older generation of what Southern hip-hop used to sound like," explains K.R.I.T., whose stage name is an acronym for King Remembered In Time. "I was influenced by the third coast as far as Texas, Tennessee, and Atlanta so I was really trying to put all those sounds that I grew up listening to together to make a sound for myself." 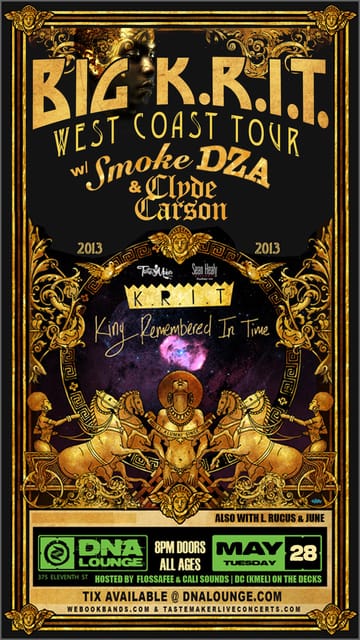