The Technicolors
Fictionist
The Technicolors are a musically sophisticated young rock band hailing from Phoenix, Arizona, who blend grand gestures of rock-n-roll with elements of classic acoustic rock. Their ambitious new album Listener was recorded over a span of ten days in January. Fresh off the road, The Technicolors had found a new energy and were anxious to make their debut album as a band.

They spent 2011 and 2012 hitting it hard, tirelessly touring the nation and finding their sound as a band. With driving electric guitar riffs and a flair for the dramatic, the band started gaining a reputation of being loud...in a good way. "We would show up to these tiny bars with a lot of gear and get really loud. We love big songs," says Smiley.

Citing influences like Tom Petty & the Heartbreakers, Bruce Springsteen, Led Zeppelin, Thin Lizzy, and the Travelling Wilburys, The Technicolors focused on creating a dynamic album of expansive songs that can be musically complex and artistic and still reach a vast amount of people. Listener weaves ambient electric guitar beds with searing solos punctuated with Smiley's earnest vocals reminiscent of Oasis and Wolfmother. 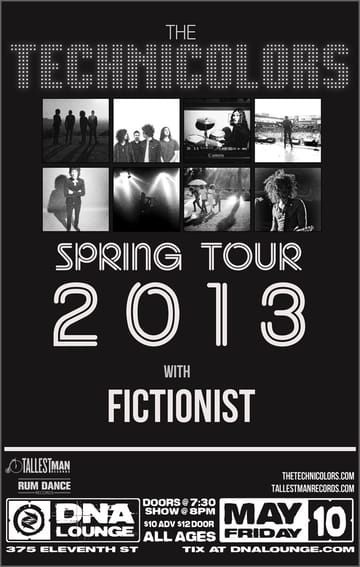