Led Zepagain
Plus guests!
Since the band's inception in 1989, Led Zepagain has become highly regarded as the most authentic representation of Led Zeppelin in the world today.

In 2004, Led Zeppelin guitarist Jimmy Page himself attended a Led Zepagain show at the House of Blues in LA. He was absolutely astonished at the bands accuracy stating "It's amazing how much you sound like us. You must have grown up on this because you were inside the music, and you paid attention to detail in your presentation...I can tell you guys really love the music!"

Led Zepagain takes their audience to a place that not only replicates a Led Zeppelin concert, but captures the heart and soul of the world's greatest band.

A Led Zepagain show features all of the Zeppelin highlights, from the high-energy electric classics, to the beautiful acoustic works; from the soaring leads on the double-neck guitar, to the brilliant keyboard passages, and from the high, Robert Plant screams, to the trademark pounding rhythms. 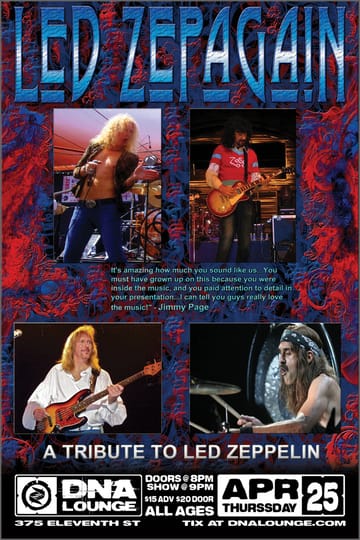