3RDEYEGIRL recently made their national television debut on NBC's Late Night With Jimmy Fallon, in which Prince and the band performed his newly released song Screwdriver and classic tune Bambi.

Rolling Stone has named Prince "one of the world's greatest guitarists," and 3RDEYEGIRL is already turning critics' heads. Says Sticky Magazine of guitarist Donna Grantis: "the full impact of Grantis is her live performance: the interaction with other musicians onstage, the improvisational wizardry and the sheer passion that can be felt." The Current raves about Ida Nielsen and drummer Hannah Ford: "Nielsen and Ford prove to be a powerhouse rhythm section." Guitar Center echoes of Ford: "From the moment the show opens until it closes, you will feel the excitement and power of Hannah's assault on her drum kit." 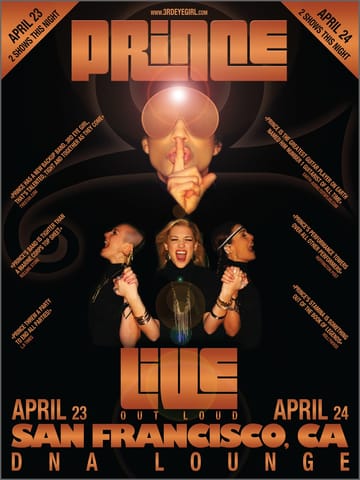