Orchid
Glitter Wizard
Hell Fire
San Francisco's own Orchid owe their sound to the grand masters of rock. They walk in the footsteps of Led Zeppelin, Black Sabbath and even Pink Floyd. Classic heavy rock, the mix of blues, folk and hard rock, dominated the early seventies yet Orchid have captured that era as if it was their birthright, channeling the soul of that sound in their original masterpieces. Worship Sabbath or die!

Glitter Wizard has drunk of the same Kool-Aid. Laying down a sound that is at times 70's doom and progressive psych rock, mashing out a party mix that your dad left in under the seat of the van you were conceived in, buried in the bongwater stained shag along with you mom's peacock feather roach clip.

Hell Fire cites influences such as Iron Maiden, Helloween, Metallica, Riot, Overkill etc. Combining the speed and heaviness of thrash metal with the guitar harmonies and soaring vocals that were created through the New Wave of British Heavy Metal, Hell Fire is here to kick you in the ass and party your face off at the same time! 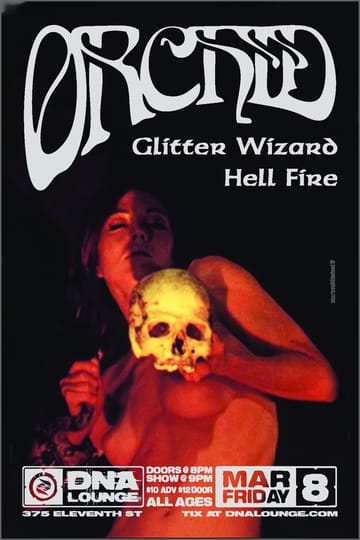