Ghost Parade
The Soonest
The Chaw
Ghost Parade is a progressive rock band from San Francisco composed three handsome young men sneaking onto roofs and into your hearts. Their brand of melodic, emotive alt-rock hints at an emo-fied version of the Deftones with some killer licks mixed in.

The Soonest has a sound which has been described as rich and haunting and has been compared to bands such as The National, Bloc Party, and Arcade Fire. The members' diverse geographical backgrounds also help bring different perspectives to the music, as the members come from cities such as Atlanta, Boston, St. Louis, Los Angeles, and San Jose.

The Chaw is a four piece Psych Rock band from San Francisco characterized by dark moody sounds, drenched in reverb, referencing soundtracks of the classic spaghetti westerns, big open bar chords and barky low register guitar leads ala Dick Dale, and psychedelic soundscapes that take you on a trip on a dusty trail through a vivid world, full of mystery, and intrigue. 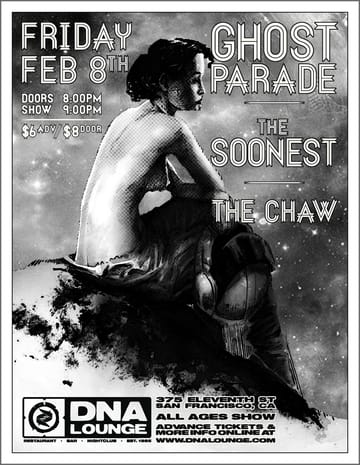