A Plus D
Dada
Smash-Up Derby (performing live at 11pm, mashing up the biggest hits of 2012!)

Free Bootie mashup CDs to the first 100 people through the door!
It's Bootie's Pre-NYE Non-Amateur Night -- avoid the New Year's Eve crowds and start your partying early! It's also Patron Appreciation Night, because it's only $10 cover all night long! Resident DJs A Plus D and Dada will be throwing down the mashups on the main floor, while at 11 PM, Bootie's own house band Smash-Up Derby will be taking the stage to mash up the biggest hits of 2012.

In the new Above DNA space, DJs Mykill and Dcnstrct (from the clubs Cockfight and Homo Erectus) bring their sexy brand of indie-electro, while in the Lounge, it's First Base, as DJ Loryn, DJ Chai, and Becky Knox bring the same sexy-sporty-nerdy realness that they do on third Thursdays at Rebel. Spinning old-school breaks, disco house, and electro breaks, booty shorts, sweatbands, tube socks, and athletic attire are encouraged! 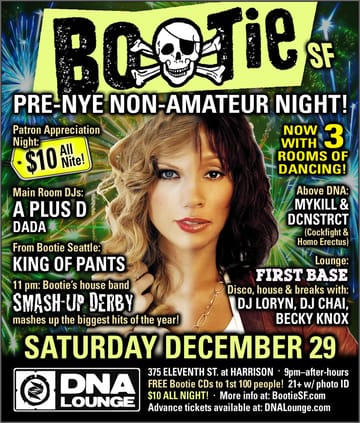