Tripp vs. Faroff vs. John!John!

Free Bootie mashup CDs to the first 100 people through the door!
Three of Bootie's best DJs duke it out on the decks to see who has the mashup mastery to make you dance the hardest! Bootie Mashup residents Tripp and John!John! go up against Bootie LA resident DJ Faroff, in a battle with only one guaranteed winner -- You! For the Midnight Mashup Show, Vau de Vire Society returns with an amazing circus act, while Glitterazzi takes over the new Above DNA room with a night of explosive electro, mashups, and house, with DJs Meikee Magnetic and Mixtress Shizaam. And finally, in the Lounge, it's DJ Bus Station John, who will be spinning the same popular mix of rare vintage disco-funk he plays at Tubesteak Connection, his long-running Thursday night party at Aunt Charlie's in the Tenderloin. 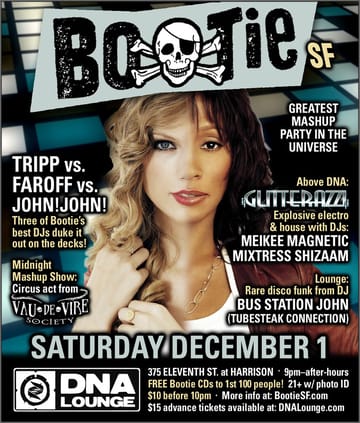