Project 86
I Am Empire
Death Valley High
Project 86 is an rock band from Orange County, California, formed in 1996. The band has released seven studio albums, which have collectively sold nearly 500,000 units worldwide, two EPs, two DVDs, and one live album. Their music is characterized by a rock/post-hardcore/alternative style. Frontman Andrew Schwab's poetic and introspective lyrics have addressed a wide variety of topics such as conformity and emptiness.

I Am Empire are from San Jose, California. Sometimes the most compelling art can come from life's greatest struggles, which in the case of Tooth & Nail newcomers I Am Empire, only added fuel to the group's already blazing alternative rock fire. Though the San Jose-bred fivesome had no trouble igniting the local scene since forming in 2008, including dates alongside Flyleaf, Sublime, Deftones, Silversun Pickups, Thursday, Four Year Strong and The Wedding, a pair of charting singles ("You're A Fake" and "The Elevator"), plus additional acclaim from Alternative Press, AOL's Spinner.com and San Francisco's LIVE105 radio station, much of the catalyst behind the band's label debut Kings stems from front man Austin Lyons' fractured upbringing.

Death Valley High, from San Francisco, is where gnashing hard rock and death pop converge. On its sophomore album- Doom, In Full Bloom, the San Francisco quartet unleashes a torrent of monstrous riffs and infectious hooks. 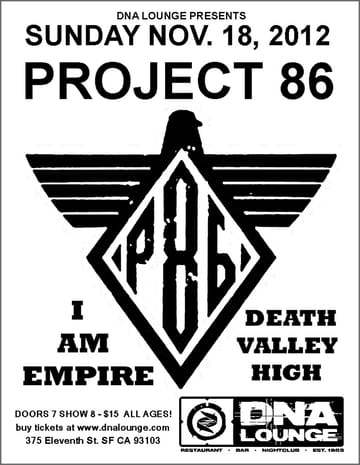