Free Bootie mashup CDs to the first 100 people through the door!
Pull on your boots, grab your cowboy hats and get ready to two-step, as we present our first-ever Bootie Hoedown! All your favorite country/western and roadhouse tunes will be mashed up with anything and everything, with resident DJs Mysterious D and John!John! mixing them in through the night! It's going to be as eclectic a night as Bootie has ever thrown, which is saying something! There will even be limited-edition "Bootie Hoedown" CDs to give away to the first 100 people (and maybe a few more later in the night!)

At 11 PM, Cookie Dough presents "The Monster Show", a non-stop mega-mixed drag queen hoedown extravaganza, featuring some of San Francisco's edgiest drag performers. And in the upstairs room, it's the Monster Electro-House Room, as DJ MC2 and Derek B keep it thumpy for your dancing pleasure! 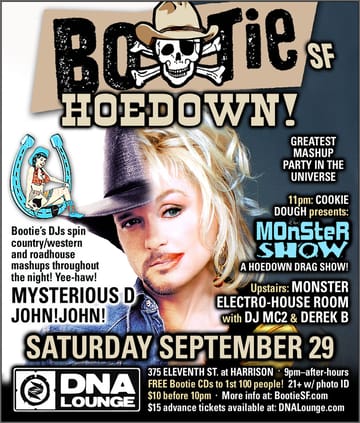