The FQP is an only-in-SF glamour contest establish in 1995 by Diet Popstitute and Ruby Toosday, continued by the KLUBSTiTUTE KOLLECTiVE, and benefits many local community organizations. Originally intended for female female-impersonators, that is, women-pretending-to-be-men-pretending-to-be-women, the FQP is now a celebration for female drag performers in their own right. Brought out of the void by Bea Dazzler and Holy McGrail, the revitalized pageant will prove to be a gender-bending space oddity!

"Wacky, wonderful... WAY over the top," exclaims Reuters on CNN.com.

This year, candidates will compete with a "Cosmic Couture" theme in a Fashion Walk and Talent Competition. (Psst! Audience members can literally tip the scales, with bonus points granted with each dollar tipped!) Fauxs vie for fabulous prize packages from donors including; Kent Taylor Photography, Trannyshack, Fabric Outlet and Peaches Christ Productions -- but only one will be cosmo-naughty enough to walk away with the title, Faux Queen 2012! 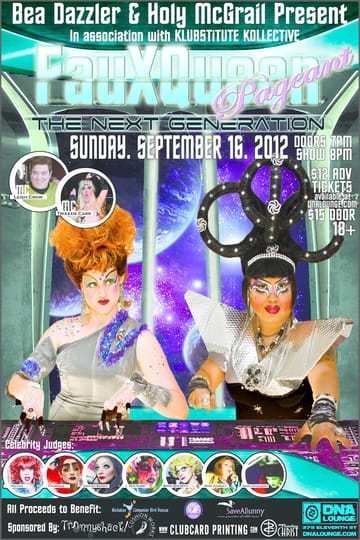 Bea Dazzler: Holding Out For a Hero