Bootie's DJs sprinkle in MJ mashups throughout the night!
Smash-Up Derby (performing live at 11pm, pays mashup tribute to the "King of Pop")

Classic funk & soul from the '60 to now, with DJs:
Myster C
Mr. Washington

Free "Bootie Mashes Michael Jackson" CDs to the first 100 people!
Bootie celebrates Michael Jackson's birthday with an evening filled with mashup tributes to the late, great "King of Pop." DJ Tripp, DJ Tyme & Nathan Scot, and DJ Dada will be sprinkling in MJ mashups throughout the night, while at 11 PM, live Bootie house band Smash-Up Derby reimagines what it would sound like if Michael had fronted such bands as Nirvana, Guns N' Roses, and the Hives!

For the Midnight Mashup Show, the Bay Area Flash Mob returns to the Bootie stage to present a special tribute to MJ, while in the upstairs room, Myster C and Mr. Washington keep it classy, spinning sets of classic funk and soul from the '60s to now. And finally, there will be free "Bootie Mashes Michael Jackson" CDs for the first 100 people through the door! 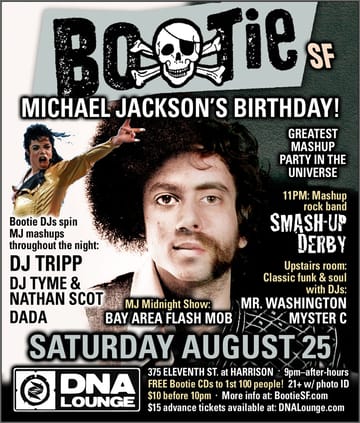