Free Bootie mashup CDs to the first 100 people through the door!
It's Dueling Divas Night -- as DJ Paul V. comes up from Bootie LA to showcase the hottest mashups from the fairer sex. With everyone from Madonna to Gaga, Rihanna to Xtina, Britney to Blondie, Gwen Stefani to Beyoncé -- along with Katy Perry, Ke$ha, Missy Elliott, Kylie, Fergie, Pink, Robyn, La Roux, Kelis and everyone in-between -- this bitchin' battle will feature these fierce ruling divas at their bootlegged best!

Also spinning mashups on the main floor will be Bootie Mashup's own DJ Tripp. From the Vau de Vire Society, Kara Nova brings her pole acrobatics for the Midnight Mashup Show. And in the upstairs room, it's the return of DJ Bus Station John, who will be spinning the same rare vintage disco-funk records he plays at Tubesteak Connection, his long-running Thursday night party at Aunt Charlie's in the Tenderloin. 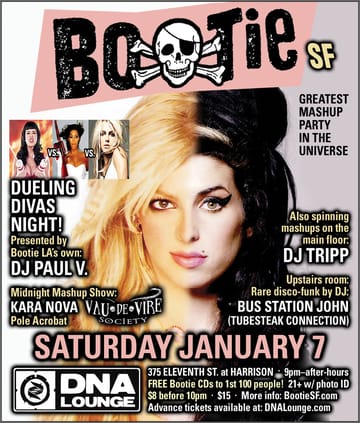