Free Bootie mashup CDs to the first 100 people through the door!
It's Christmas Eve, and it's also ... Adrian's 29th Birthday!★ It's going to be a "Friends & Family Night" at DNA Lounge, as Bootie's host, co-founder, and resident DJ celebrates his actual B-Day by spinning a special midnight set, as well as singing a few holiday mashups throughout the night, including a Midnight Mashup Show with Jason from Smash-Up Derby. The two will be performing as A+J, singing the modern classic, "Dick In a Box."

Also spinning on the main floor will be resident DJ Mysterious D, and doing a late-night set, it's the return of DJ Jay-R. And in the upstairs room, John!John! Battles The Italian Robot, as two of Bootie's favorite DJs throw it down, making sure you dance your ass off into the Christmas holiday! 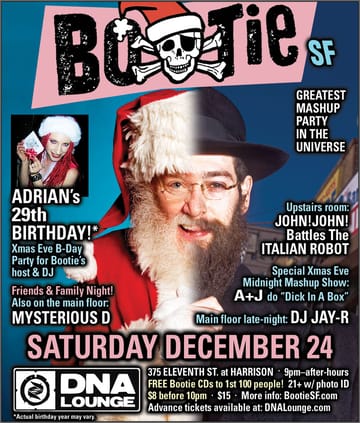