Free Bootie mashup CDs to the first 100 people through the door!
Live on stage at 11 PM, it's a holiday-themed mashup show presented by the Bay Area's best burlesque extravaganza, Hubba Hubba Revue! Hosted by emcee Kingfish, and featuring three sexy performers, an aerialist, and an entire burlesque troupe, the show promises to be a festive mix of striptease, comedy, and spectacle!

Spinning mashups all night will be DJ Tyme & Nathan Scot, who will be mixing in some holiday visuals on the DNA Lounge's big screens during their set. Joining them on the main floor will be DJ Fox and Mad Murdock. And in the upstairs room, it's Glitterazzi, a night of explosive electro, mashups, and house, with DJs Meikee Magnetic and Mixtress Shizaam. The night is a special birthday celebration for Mystie Rodriguez, and will feature special guest MC Enzyme Dynamite doing a surprise electro-alt-hip-hop performance! 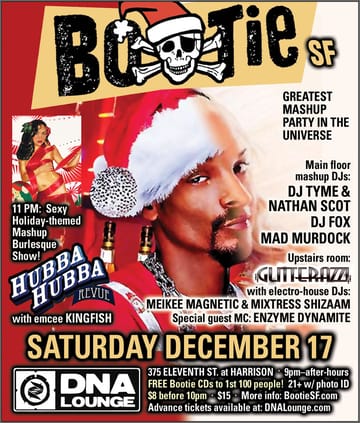