Get your fetish on!

Free Bootie mashup CDs to the first 100 people through the door!
For its Pre-Folsom Party, Bootie brings together seven different DJs and bands -- hailing from San Francisco, Los Angeles, and Seattle -- for a Folsom Street Fair pre-party, with plenty of sexy mashups and fetish-tinged fun to go around.

Joining A+D on the decks will be a trio of Bootie's favorite DJs, spinning both on the main floor and in the upstairs room -- DJ Shyboy (Bootie LA), DJ Freddy, King of Pants (Bootie Seattle), and DJ Rawburt (Blender, West Hollywood). 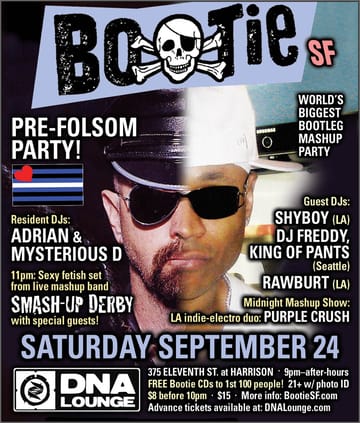